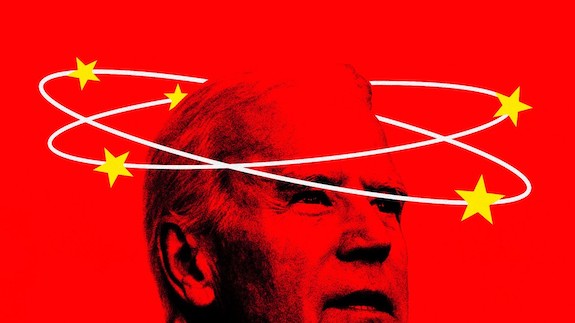 While “teachers” are feeding children roasted crickets in the classroom, we have two alleged law professors in the New York Times calling for the abolition of the U.S. Constitution. And if that weren’t enough, suddenly we have these weird polls claiming a great “surge” for SloJo Biden and his handlers and a big win for Democrats in the midterms.

The Constitution, we are told, is “famously undemocratic.” Could that be because it’s the constitution of a republic, not a “democracy”? Yeahbut, yeahbut! It’s “broken”! It doesn’t let Far Left Crazy do anything it likes. Getting rid of it, Congress could do all sorts of neat stuff with abortion and “labor rights,” whatever those are, “without having to bother with” the Constitution. It’s so inconvenient, having the law of the land written down for everyone to see! Getting rid of it, say the professors, we can “reclaim America.”

Reclaim it from what? For what? We aren’t told, but we can guess. Hey, we can always draft a new one! A whole mob of Ivy League professors, along with feminists, globalists, out-there politicians, and activists in 100 different flavors – they could all come together and draw up a brand-new “living Constitution” that changes every day, offers no certainty as to what will be the “law” on any given day, and show those wimps in Venezuela what a real socialist hell-hole looks like.

Meanwhile, Forbes.com tells us that thanks to “a recent stretch of accomplishments” – what? – Slojo and his sham of a presidency has shot up to a 47 percent approval rating. Good news for Democrats! They’ll keep the Senate, probably keep the House, and for sure keep their stranglehold on America.

What accomplishments? Our panicked skedaddle from Afghanistan? Doubling the price of gasoline? A mass invasion of illegal aliens? The transformation of the FBI into a partisan goon squad that raids an ex-president’s home and spies on parents as “domestic terrorists” when they object to crazy school board policies? And don’t forget this – “There is no inflation.” Try that on for size, in your next trip to the supermarket.

Not to put too fine a point on it, but these “accomplishments” are only lies. Big fat thumping lies. There are no accomplishments.

Yeahbut, yeahbut! We’ve got a Gender Revolution that we’ve got to finish! We’ve got to erase all limits on abortion! There’s racial paranoia to plant and cultivate and harvest! They can’t finish a Fundamental Transformation Of America in just two years – although they’ve already done more damage than anyone thought possible. Are those the accomplishments of this regime?

So why the up-with-Biden polls? How did we go from Red Wave to Blue Wave in the blink of an eye? Who’s believing all the lies? Who likes paying almost $5 a gallon for gas? And that was quite a show of applied hypocrisy: jack the price up to $5-plus, then shave off a few pennies to bring it to $4.75, and then jump up and down crying “We brought the price back down!” Who in his right mind has been taken in by this?

Maybe the polls are… well, dishonest. Maybe they’ve been purposely constructed to yield results that would, they hope, demoralize all the voters but the handful of delusional Biden zealots. I admit that I can’t conceive of any explanation for this weirdness.

So we’ll have to play it as a worst-case scenario in the making. Work hard, fight hard, and pray harder –

Because if we lose this election, I think we lose America.