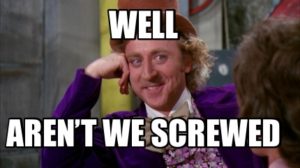 Everything in the news cycle today seems like so much BullSHIT on the periphery as we see the nation being dismantled just as rapidly as the Biden regime and its apparatchiks can manage.

This is just some thoughts that came to me today after I heard someone speaking about the “need for Social Justice” and I just about puked. There’s nothing “fair” about my piece. It isn’t intended to be, since this is a war we’re in for the very survival of America. Neither did I write it as any attempt at a scholarly-type white paper. This is simply intended as an excoriating condemnation of all the anti-American useful-idiots out there promoting “SOCIAL JUSTICE” with every panting breath they take.

I hope it makes people think and awaken to what’s really taking place in America under these Commies who don’t even bother hiding who they are or what they’re really doing anymore.

SOCIAL JUSTICE Is the Law of the Jungle ~ J.O.S.

Social Justice means the criminals are treated like poor little lost children who just need to have the seriousness of their crimes explained to them to get them to stop, even the ones who are on their 5th or 35th murder. And they get to be released to go live at home with an designer ankle bracelet to think about what they’ve done, on a No Bail Release, more likely to consider how many more they want to violently murder and just who’s next. 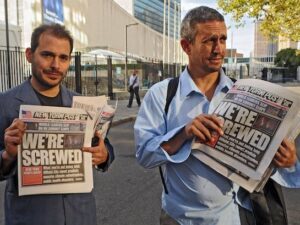 Social Justice tells the good, decent, honest hard-working people — the owners of Mom & Pop Shops — that they must stand by silently without any defensive measures and allow those who won’t work or have made themselves unemployable through their criminal actions to loot their stores at will and burn them to the ground if they dare utter a word of protest.

Social Justice says that people just as able as anyone to work are to be given free rein to loot and burn entire cities and occupy spaces as separately governed areas outside any control or jurisdiction of local, state or federal law. Anyone who says different is subject to being harassed, canceled or violently beaten, even shot and killed.

Social Justice and its Marxist/Maoist advocates say the parents don’t have any rights where their children are concerned, especially if some third grade amerikkan Commie Fascist “teacher” has determined your child is “confused about his or her gender and sexual identity. They would have us all place our children in State Care as Wards of the State to be done with as they see fit, whether that includes sex-change operations, grooming as sex partners for NAMBLA or turning them into a militant soldier for making all America “Gay”/ LGBTQ and Transgender friendly fighting to force all America to give this Small Minority of our population Privilege and Rights above and beyond those rights of all other Americans.

SOCIAL JUSTICE incorporates every vile and evil entity and item one can imagine that cuts against the grain and works to subvert the family, culture and traditional Christian and Western American principles and virtues that were utilized and followed for the founding of the country. Its simply a nice catch-phrase that demands the end of America.

SOCIAL JUSTICE is no “Justice” at all. It simply provides cover for malcontents, thieves and murderers, and it rejects the Founding and the Constitution. It’s steeped deep in Black Liberation Theology, Marxism, Critical Race Theory, the Sexual Revolution and every anti-American counter-culture trash theory that is antithetical to America’s Christian founding.

SOCIAL JUSTICE means redistributing the wealth. It means the dregs of society without the will and backbone or moral character strong enough to have a sense of self-worth get to take the rewards of Your hard work from Your businesses, Your homes and Your very hands as You stand flabbergasted on a street corner in front of Walgreens surrounded by a rioting flash mob of people of color who believe RIOTING & LOOTING are now a Right and they are entitled to take what they want at any point in time, without any consequences from the local law enforcement or legal authorities.

SOCIAL JUSTICE means the Commies can ignore the law altogether, while conservative and independent patriotic Americans must adhere to the full letter of the law or get the Book Thrown at Them by some Bleeding-heart Commie Activist Judge. It means the amerikkan Democratic Party Communists get to take and destroy anything they wish by any means necessary and everybody else is supposed to grin and bear it and say “Oh how lovely”, yes please do burn down my business again”. 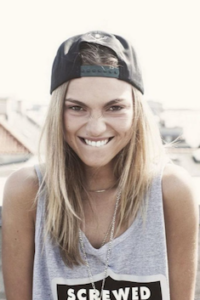 Social Justice lets Black Lives Matter and Antifa burn federal buildings and go on as tho’ nothing happened, or for any who might accidentally get arrested by an “over-exuberant police officer” actually doing his job and upholding the law, they immediately get released from jail on their own recognizance, while many who simply walked through the Capitol Building on January 6th as spectators have had the full weight of the law and the federal government rain down on them, putting them in prison without any chance of bail and without being charged.

Social Justice is regressive and it means the total and complete annihilation of civilization as we have known it for over a hundred and fifty years or so.

SOCIAL JUSTICE SUCCEEDING IN AMERICA MEANS THE END OF FREEDOM AND LIBERTY AND OUR REPUBLIC.

Make no mistake. These red, radical commie rat bastards who shout about “Justice” and “Peace” don’t want either. They simply want the collapse of our system and total control under an authoritarian socialist state where they hope to be the Top Dogs in charge crackin’ the whips on the backs of all their opposition.

What the Red, Radical “progressive” Democratic Party Communist Rat Bastards call Social Justice isn’t justice at all. It follows no Righteous Law and it completely violates all Americans’ Inalienable God-given Rights, as it demands and takes whatever it wants without any authority to do so and outside of any law known to man, unless we’re speaking of the Law of the Jungle.

3 thoughts on “And WHERE are her sisters, Blued and Tattooed?”