Two migrant buses sent by Texas Governor Greg Abbott arrived at Vice President Kamala Harris’ residence in Washington DC this morning in an escalation of the ongoing immigration crisis. More than 100 people traveled from Eagle Pass, Texas, to the Naval Observatory after crossing the border – just days after the Vice President insisted it was ‘secure’. 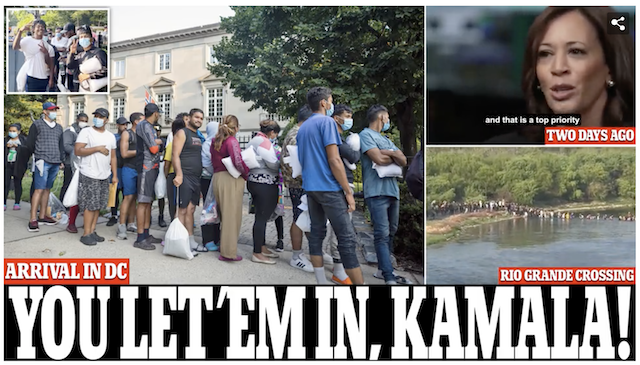 During an interview on Sunday, Harris told NBC’s Chuck Todd: ‘The border is secure, but we also have a broken immigration system, in particular over the last four years before we came in, and it needs to be fixed. ‘We have a secure border in that that is a priority for any nation, including ours and our administration.’

But many migrants who arrived from Venezuela, Uruguay, Colombia and Mexico told Fox News that they thought the border was open despite her comments. Those who arrived on the bus said that they had travelled from Venezuela, with many women, children and families smiling as they got off the vehicles. Gov Abbott appears to have directly retaliated to Harris’ comments, by sending the latest load of migrants close to her home in DC. (Continue to full article)