“I guess what bothers me so much about what I see going on in Washington, DC is an effort to keep people from finding out about the mistakes of lawmakers, and then when they’re uncovered, an effort to fool people and pretend there was nothing wrong.” ~ Chris Bell 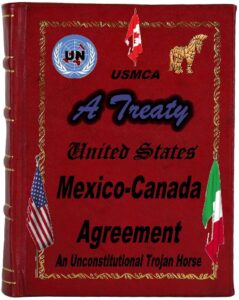 Did you read the much touted United States Mexico-Canada Free Trade Agreement (USMCA)? Of course you didn’t, it’s almost 2,000 pages long. But that’s OK, neither did many of your senators and congressmen and women but they passed it anyway. Did the President read the entire document? It’s highly unlikely.

Oh, and by the way, did you get to vote for the USMCA? Of course not! Your senators and congressmen and women and the President did it for you. Do you trust them to act on your behalf and in your best interests and in the nation’s best interests? Given the Congresses’ past record on treaties, laws, rules and regulations, it doesn’t leave much to trust. Perhaps you remember Obama Care where its supposed benefits were outright lies.

Once the Democrats got a hold of it in the U. S. House, they added a whole bunch of their favorite labor, socialist, environmental and one-world policies, turning it into a North American Union Trade Socialist and Environmental Agreement where national sovereignty and American law took a back seat to their world government agenda. The Democrat’s additions were embodied in a 27-page addendum to the USMCA, containing socialist and legalese gobbledygook. We read it. President Trump should have vetoed the entire USMCA.

But the big question is, does the USMCA violate the U. S. Constitution? Unfortunately, in many areas it does. In Bond v. United States, the majority wrote that, “while Congress has the authority to create legislation to enforce treaties, it must do so while respecting the traditional division of sovereign responsibility between the federal government and the states.”

Justice Thomas concurred and wrote that, “while Congress has the power to create laws to enforce treaties, that power does not extend to the enforcement of laws that would infringe on states’ rights.” The USMCA tramples all over states’ rights and property rights.

In the 1957 case of Reid v. Covert, the high court majority wrote on the Supremacy Clause that, “There is nothing in this language which intimates that treaties and laws enacted pursuant to them do not have to comply with the provisions of the Constitution.”

If the USMCA were in fact a true free trade agreement, without all the social, environmental and labor provisions in it, no constitutional conflict would exist. But the USMCA implements and requires enforcement of international law in place of American federal and state law ….. in violation of the U. S. Constitution. Here’s how:

• The USMCA promotes and creates economic integration of North America, not unlike the European Union, overriding American sovereignty. Is that what the American people wanted, a top-down, burdensome, international bureaucracy with the power to ignore American law? Why do you suppose Britain opted out of the European Union? The EU created the “Euro” for its currency. Will the USMCA create a cross-border currency called the “Amero” and scrap the dollar?

“Land … cannot be treated as an ordinary asset, controlled by individuals and subject to the pressures and inefficiencies of the market. Private land ownership is also a principal instrument of accumulation and concentration of wealth and therefore contributes to social injustice; if unchecked, it may become a major obstacle in the planning and implementation of development schemes. Public control of land use is therefore indispensable.”

• The USMCA works to integrate North American energy, where a common set of policies, rules and regulations would govern every energy supplier and producer in Canada, the U. S. and Mexico. This leaves the door open to environmental special interests to regulate all oil production under international edicts that employ climate change or other international environmental objectives. What if the overseers of the USMCA decided, for environmental reasons, that fracking was to be outlawed? New York, Vermont and Maryland have already banned fracking. Fracking led America to oil independence. What if they decided to limit oil production in favor of solar and wind power? Just watch your heating bill double or triple.

• The USMCA could easily and most likely will lead to a cross-border invasion of illegal aliens. In Chapter 23 of the Agreement it states, “No party shall adopt or maintain a measure that imposes a limitation on the total number of natural persons that may be employed in a particular financial service sector or that a financial institution or cross-border service supplier may employ in the form of numerical quotas or the requirement of an economic needs test.”

• Other provisions in the agreement (Chapters 15 and 23) could undermine current border security measures and further open our nation’s borders to illegal entry, drugs and human trafficking.

• In the area of labor, the USMCA mandates collective bargaining, which could force many non-union American businesses to the union labor negotiations table by force of law.

• Chapter 30 of the USMCA directly interferes in U. S. sovereignty. It establishes a “Free Trade Commission” as a regional governing bureaucracy with the power to change the agreement without the approval of the U. S. Congress.

• Under Chapter 24 of the USMCA, the United Nations Law of the Sea Treaty is invoked, a treaty that also was never ratified by the U. S. Senate. At the time, the U. S. Ambassador to the UN stated that the Law of the Sea Treaty would reduce our capacity for self-government and self-defense. In fact, this chapter mandates the parties to adhere to seven international multilateral environmental agreements.

These are just some of the highlights from the 1,800-page USMCA. Before the Democrats got a hold of it, the agreement may have been a workable treaty. Why President Trump signed the Treaty can only be ascribed to his lack of knowledge of what is really in it. Unfortunately, the Treaty is now the “law of the land” according to the U. S. Constitution. One wonders if anyone will actually challenge the Constitutional conflicts in court?

This only serves to illuminate what lawmakers, senators and congressmen and women, at every level of government, do to treaties, new laws and bureaucratic rules. They are loaded up with socialist and environmental fine print that buries hidden agendas and unconstitutional and many times international language. Very few Americans, much less the politicians, take the time to read the laws and rules the policy makers sign into law. Very few laws or bureaucratic rules are ever challenged in court to determine their constitutionality. Consequently, we end up with millions of unconstitutional laws that are directly opposed to or repeal the unalienable rights of American citizens. This is exactly how socialism, radical environmentalism and the one-world-order crept into American law hidden in the fine print ….. under our very noses.

SIDEBAR: THE US 2020 CENSUS:
2020 is a census year where Americans are flooded by census takers asking all kinds of impertinent questions about which the government does not need to know but says they do. Every 10 years the intrusion into our private lives by census takers gets deeper and deeper. Tens of millions of Americans literally “hate” this intrusion. The Constitution in Article 1, Section 2, Clause 3 calls for an enumeration, or head count, every 10 years for the purpose of apportioning state representatives to the U. S. House of Representatives. An enumeration means the number of persons in the household. Congress has expanded this “head count” to anything they want to know about you, except whether you are a U. S. Citizen, or not. Sadly, the courts have upheld the government’s right to probe into your personal affairs, stating that you don’t have to worry because your information is kept confidential. But we all know that any information loaded onto a server these days is open to hacking, (just ask Equifax) or the prying eyes of bureaucrats, or even the IRS. So the government’s promise to keep all your private information confidential is an empty one, like all of government’s other promises. Anything you say on that form can and will be used against you in an administrative procedure, or a court of law.

Nevertheless, you still have the right to REVOKE the census taker’s implied license to come on your property and collect your data. (They can still mail the form to you.) That right to REVOKE entry into your property by government agents and law enforcement, whether you live in a big city or out in the country, was upheld by a 2016 decision from the 10th Circuit Court of Appeals in Carlos v. United States (D.C. No. 6:13-CR-00006-RAW-2).

NARLO has created a copyrighted No Trespass sign, as a companion to our large constitutional No Trespassing sign, containing the language from the 10th Circuit Court decision. We call our new sign the “Revocation of Implied License” No Trespass sign and it is available HERE. This powerful, legally intimidating No Trespass sign is not available anywhere else. Stop that census taker at the front gate, or any other government agent or law enforcement, with our “REVOCATION” sign. 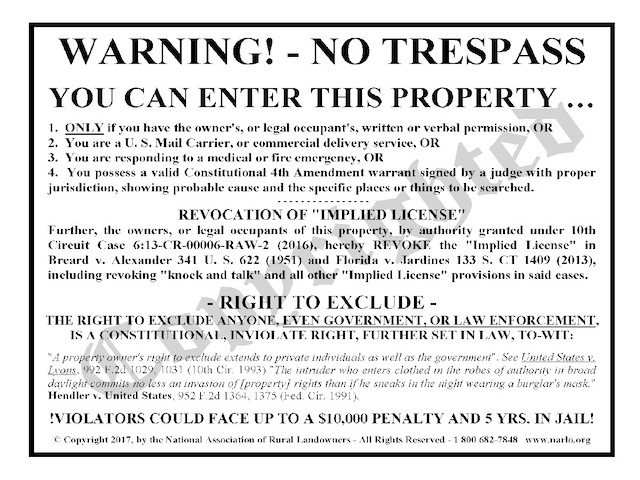 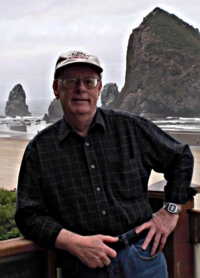 ~ The Author ~
Ron Ewart, a nationally known author and speaker on freedom and property issues and author of his weekly column, “In Defense of Rural America“, is the President of the The National Association of Rural Landowners (NARLO), a non-profit corporation headquartered in Washington State and dedicated to restoring, maintaining and defending property rights for urban and rural landowners. Mr. Ewart can be reached for comment at [email protected].

Mr. Ewart has been a continuing contributor to the Kettle Moraine family of publications since May of 2007.