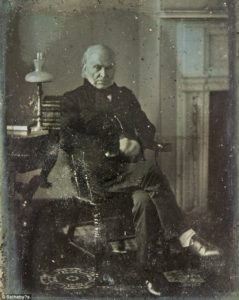 As this is the day in which we commemorate the virgin birth of the Lord Jesus Christ, I am reminded of a quote by John Quincy Adams. On July 4, 1837, he spoke these words:

Why is it that, next to the birth day of the Savior of the world, your most joyous and most venerated festival returns on this day? . . . Is it not that, in the chain of human events, the birthday of the nation is indissolubly linked with the birthday of the Savior? That it forms a leading event in the progress of the Gospel dispensation? Is it not that the Declaration of Independence first organized the social compact on the foundation of the Redeemer’s mission upon earth? That it laid the cornerstone of human government upon the first precepts of Christianity, and gave to the world the first irrevocable pledge of the fulfillment of the prophecies announced directly from Heaven at the birth of the Savior and predicted by the greatest of the Hebrew prophets six hundred years before?

Adams was exactly right. The United States of America is the only nation in human history established by mostly Christian people, founded upon 2,000 years of Christian thought, Reformation preaching and Biblical Natural Law principles—and dedicated to the purpose of religious and personal liberty and equal justice under the law. This truth is easily observed within America’s earliest history.

America’s forebears first established a written covenant with God as early as November 11, 1620, when they penned The Mayflower Compact. It states in part:

In the name of God, Amen. . . . Having undertaken, for the glory of God, and advancement of the Christian faith and honour of our king and country, a voyage to plant the first colonie in the Northern parts of Virginia, do by these presents solemnly and mutually in the presence of God, and one of another, covenant, and combine our selves together into a civil body politick; for our better ordering, and preservation and furtherance of the ends aforesaid; and by virtue hereof to enact, constitute, and frame such just and equal laws, ordinances, Acts, constitutions and offices, from time to time, as shall be thought most meet and convenient for the general good of the colonie: unto which we promise all due submission and obedience.

From the beginning, the sentiments and statements of America’s founders make it clear that this country has enjoyed a love and appreciation for the rights and freedoms recognized in Natural Law that is unique in the annals of human history. No other nation has such a heritage.

The Declaration of Independence states, “[Men] are endowed by their Creator with certain unalienable Rights, that among these are Life, Liberty and the pursuit of Happiness.” It also states that these rights are “self-evident” and that they were formed by the “Laws of Nature.” These principles are also taken directly from the Scriptures—and from Enlightenment fathers such as Hugo Grotius, John Locke, Samuel Von Pufendorf, Emer de Vattel and Charles Montesquieu. Furthermore, one cannot read what these men wrote without quickly observing that they formed their writings largely on the Scriptures.

They could never have imagined that a U.S. president (Donald Trump) would attempt to deny people the freedom of speech and religion and religion or call for people to be stripped of their right of self-defense without commiting a crime and without the due process of law.

I am also confident that America’s founders would be completely repulsed by the way the United States has jumped headlong into welfarism, corporatism and Zionism. At the national level, Democrats and Republicans alike have created a central government so large that it would be unrecognizable to any founding father—even Alexander Hamilton.

Big Business sucks feverishly at the teat of Big Government; the major media has become little more than a propaganda ministry of Big Government; corporate 501c3 churches view Big Government as a god to be worshipped; and America (including and especially its Christians and churches) seems to be drunk on the perpetual wars and entangling alliances of the neocon Warfare State.

Surely, our Founding Fathers must be turning over in their graves.

Therefore, it behooves us to recommit ourselves to our nation’s founding principles.

Furthermore, let us renew with vigor the fight for freedom before our liberties and heritage disappear altogether.

John Quincy Adams was right. The birth of Christ and the birth of America are indissolubly linked.

Chuck Baldwin – is a radio broadcaster, syndicated columnist, and pastor dedicated to preserving the historic principles upon which America was founded.

“Chuck Baldwin Live” aired its first program on August 1, 1994. The broadcast originated as a Radio Talk Show and continued in that capacity for eight years. The current format of the show features a recording of Dr. Baldwin’s sermons and commentaries that are heard 30 times a week on 12 radio stations in 5 States, including Northwest Florida (from Destin, Florida to Mobile Alabama) and Southern Alabama (including Evergreen, Greenville, and Monroeville), parts of Central Florida (Deland area), Lynchburg and Martinsville, Virginia (including Roanoke, Virginia and into the Triad area of Winston/Salem, Greensboro, and High Point North Carolina), and in Utah (between Salt Lake City and Las Vegas). CBL is constitutionalist, Christian, pro-life, pro-traditional family, and patriotic. We support constitutional government and the Bill of Rights. We hold fast to the principles and values expressed by the Founding Fathers and the Declaration of Independence. We invite you to visit his WEB SITE.

Chuck Baldwin commentaries may not be reprinted or republished without permission. All Rights Reserved. Published by Kettle Moraine, Ltd. by arrangement, and with permission of Chuck Baldwin.