The 39 Steps is one of five films that Alfred Hitchcock made in England about espionage in the mid-to-late 1930s. These films capture the growing threat felt in Britain from foreign powers. In their scenarios the nation’s security was nowhere more threatened than by spies hiding in plain sight… 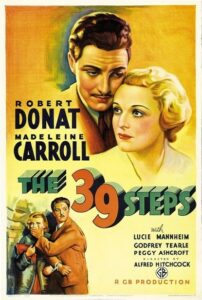 The Thirty-Nine Steps – A novel.

In the end, that became part of our cinematic DNA. We all know the plot, or think we do.

What if, within the frames of the Hitchcock’s movie, there was a code? A warning of what then was taking place in England.

In the year that it appeared on movie screens – 1935 – it is easy to forget the England from which it emerged: a nation on the brink of something.

In October 1932, Sir Oswald Mosley founded the British Union of Fascists (BUF). By 1934, BUF’s membership had risen to 50,000. Rallies were impressive affairs. From its neo-Gothic fortress, Black Shirt House, on the King’s Road in Chelsea, London, Black Shirted followers would travel to the arenas at nearby Earl’s Court or Olympia where Mosley’s oratory would electrify. The enemy, he pronounced, was clear for all to see: the Jews, the Reds, the whole corrupt capitalist system and its front: liberal democracy. For many, it seemed, at last, Great Britain’s very own ‘Strong Man’ had emerged. The Hour of the Fascist had finally come. It seemed as if power was within the Black Shirts’ grasp. The roars of appreciation from within and outside the arenas could be heard all over London, and indeed beyond. The national newspaper, The Daily Mail, ran an editorial entitled: ‘Hurrah for the Black Shirts!’ Gazing out over London from the top of Black Shirt House, Mosley must have wondered not ‘If’ but ‘When’.

In the same city, to the north of fashionable Chelsea, was another London, Shepherds Bush. In its backstreets there existed an industrial facility: Lime Grove Studios. Built in 1915, its artisans did not make cars or armaments but films. And it was there that, in 1934, a young Alfred Hitchcock started to work on John Buchan’s 1915 novel, The Thirty-Nine Steps. The plot of the novel had been changed, but its essentials were retained if stripped of the Edwardian paranoia around Empire loss. Now the story was brought up to date, and spoke instead of fears around national survival. As the thunderous applause still echoed across London from Earls Court for the Black Shirted Color Party as it carried forth into the night the Fascist flag of the BUF, just a few miles to the north, the cameras began to roll upon a thriller that spoke of fascism, of foreign agents and their fellow travellers.

The 39 Steps is one of five films that Hitchcock made in England about espionage in the mid-to-late 1930s. These films capture the growing threat felt in Britain from foreign powers. In their scenarios the nation’s security was nowhere more threatened than by spies hiding in plain sight. In The 39 Steps this premise is never more clearly on display, startlingly so.

But let’s start at the beginning.

The novel The Thirty-Nine Steps was written while Buchan was convalescing from illness on the Kent coast at Broadstairs. 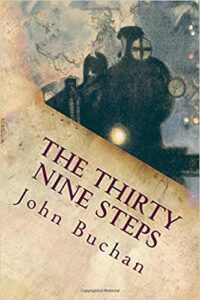 Published in 1915, the book is a conventional thriller. It has a dashing hero, Richard Hannay, pursued by a menacing group of individuals who appear to be English but are, in fact, foreign agents. A pivotal plot device, the novel’s odd title owes its origins to the steps leading down to the sea from a house in Broadstairs near where Buchan was staying.

Twenty years and a World War later, Alfred Hitchcock, one of the most promising directors in the British film industry, began filming Buchan’s novel. Hitchcock described the author’s work as ‘a strong influence [on him] for a long time’. In fact, the director’s personal library included the complete works of John Buchan. That said, Hitchcock had little sympathy for Buchan’s imperialism. In any event, while filming The 39 Steps, other more contemporary factors attracted his attention.

Importantly, as film production commenced, the shooting script was altered. The 39 Steps ‘secret’ was no longer what it had been in the source material. As Hitchcock cries ‘Action!’ and Richard Hannay, played by Robert Donat, is pursued across the Highlands and eventually back to London, let us return to Broadstairs where truth is stranger than fiction.

On Broadstairs’ North Foreland Estate there stands a 20-room mansion, called Naldera. The inspirational ‘39’ – there were in fact 78 – steps to the sea are there. For many years it had been the home of the wealthy politician, Lord Curzon. A frequent visitor to the house was his son-in-law, Sir Oswald Mosley. Mosley had married Curzon’s daughter, Cynthia, in 1920.

By 1934, however, there was someone else living at Naldera. There was a man who, like the foreign agents in The 39 Steps, had impeccable manners and an immaculate English accent, and even, on occasion, was known to wear a monocle. His name was Dr. Arthur Tester. He claimed to be English. He was in fact a Nazi spy.

Born in Germany in 1895, Tester was an unknown quantity, except that by 1927 he had been expelled from France on suspicion of spying. By 1930, he was on the Kent coast with a family and a battery of servants, happily ensconced at Naldera, which by then he had bought. During his years there, Tester had taken an interest in local politics. He had become a prominent member in the local branch of the British Union of Fascists. There were rumours of important guests glimpsed coming and going from the Tester residence, not least Oswald Mosley.

Another of these ‘important’ guests was Joseph Hepburn-Ruston, an Austrian married to a Dutch noble, whose family had given sanctuary to the fleeing Kaiser at the end of the Great War. Both Hepburn-Ruston and his wife were members of the BUF, as well as ardent and open admirers of Hitler.

By 1938, Hepburn-Ruston and Tester shared a London business address. This link made the front pages of the newspapers. The Daily Express headline stated: Monocled Doctor denies £110,000 grant from Nazi Chief. Hepburn-Ruston was alleged to have received money from German Nazis via a press agency that he ran. It was said that Tester was advising him throughout the proceedings with Germany. What both admitted to the reporter was that they were National Socialists. Needless to say, the newspaper article brought the pair to the attention of the authorities.

Soon after Kent police raided Naldera. They found it empty. Dr. Tester had disappeared. Perhaps, as in the Buchan novel, the spy’s escape was down the steps to the sea and an awaiting vessel. By whatever means he did escape, once war was declared, however, he resurfaced in Romania. During his time there, he worked for the Gestapo, specialising in interrogation. It was later reported, in 1944, that Tester was killed while fleeing the advancing Red Army. On his body his passport was found, one personally signed by der Führer.

Hepburn-Ruston stayed in England. But, upon the outbreak of war, he was interned. He was released from a prison on the Isle of Man in 1945. He settled in Ireland and is buried in Dublin where he died in 1980. His marriage had ended in 1938, but it produced a daughter, Audrey. She was to go on to become an iconic movie star, although perhaps surprisingly she never worked with Hitchcock.

In the Hitchcock movie of The 39 Steps the spies are foiled. The secret of the ‘39 steps’ revealed.

A year after the movie’s release a trial took place at the Old Bailey, London. It was the first case of spying in Britain since the end of the World War. The defendant was Dr. Herman Görtz.

Dr. Görtz had arrived in Britain on 29th August 1935, along with his 19-year-old secretary, Marianne Emig. The couple had posed as ‘uncle’ and ‘niece’. Soon, however, Emig had befriended a young RAF officer, and her detailed questions about British air defences were being answered. Eventually, the pair was rumbled when, at the bungalow they rented, their landlord stumbled upon spying equipment and promptly called the police. That bungalow was situated on Stanley Road, Broadstairs—just a few minutes’ walk from Naldera.

Although Görtz denied all accusations of spying, he was found guilty and jailed, before being deported back to Germany.

He tried to return to England, however.

In 1940, with Germany at war with England, Dr. Görtz was travelling over Britain in a Luftwaffe plane destined for the then neutral Éire. As part of ‘Operation Mainau’ his object was to help facilitate the planned invasion of Northern Ireland. Görtz parachuted into Ireland, and immediately began to make links with the IRA. In the end, he was apprehended by Irish police and interned. Subsequently, as the Reich’s 1000-year reign came prematurely to an end, Görtz took his own life with a poison capsule. At his burial in a Dublin cemetery, as his coffin draped in the Nazi flag was being lowered, a young woman stepped from the crowd and, raising her arm, cried: ‘Heil, Hitler!’

Let us return now to the fact that the plot of The Thirty-Nine Steps was changed for the 1935 film version – or rather the meaning of the ‘39 steps’ was altered.

In the film, a theatre act, Mr. Memory, knows the secret of the ‘39 steps’. At the movie’s climax and when pressed by Hannay to disclose this, Mr. Memory goes into a trance before stating that, “the ‘39 steps’ is an organisation of foreign spies collecting information on Britain’s air defences. . .“

Republished with gracious permission from the St. Austin Review (July/August 2017).