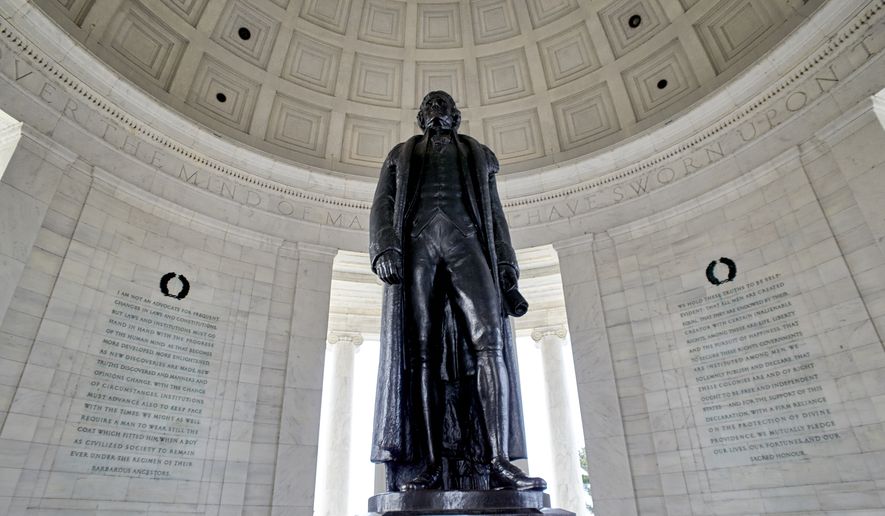 Hofstra University students have called for campus authorities to cart off a statue of Thomas Jefferson, saying the Founding Father was a slaveowner and therefore racist and therefore ought not be honored in the public sphere.

Guess the Declaration of Independence he wrote ought to go then, too — yes?

That’s where this is headed; mark those words.

Students petitioned a year ago for the statue’s removal. But it was just recently the statue became the site of a “Jefferson Has Gotta Go!” protest, organized by, curiously enough, staffers from the nearby Nassau County Planned Parenthood office.

“[The protest] isn’t just about a statue,” said former Hofstra College Democrats board member Miranda Pino, in the College Fix. “[It’s about] a legacy of racism and bigotry on college campuses.”

And ignorance and control.

Neither Pino nor others at the assemblage put it that way, but the protest — as all these types of “down with the historical monuments” rallies are — is either about ignorance of historical facts, or ultimately, about toppling America the great, both its foundations and its governing principles.

These students haven’t been properly taught the value of U.S. citizenship. So they naturally think America is a country just like any other, on par as much, say, with our European allies, our African neighbors, our Muslim-dominated Middle Eastern peeps, our third-world, barely subsisting comrades run by tyrannical and dictatorial leaders. One and the same, all the same.

One where the citizens hold the power, not the leaders.

On top of all that: Jefferson actually fought to abolish slavery.

Yes, he owned slaves — as did many of his white compatriots of the time. Hundreds of them, in fact. No denying that sin. But he was a complicated guy, a guy who wrestled with his conscience. And he was ultimately a guy who bucked popular views and denounced the institution of slavery in word, and in legislative attempt.

“Throughout his entire life,” the Thomas Jefferson Foundation wrote, “Jefferson was publicly a consistent opponent of slavery. Calling it a ‘moral depravity’ and a ‘hideous blot,’ he believed that slavery presented the greatest threat to the survival of the new American nation. Jefferson also thought that slavery was contrary to the laws of nature, which decreed that everyone had a right to personal liberty. These views were radical in a world where unfree labor was the norm.”

In 1778, Jefferson brought forth a law in Virginia that banned the importation of African slaves.

In 1784, he recommended a ban on slavery in the Northwest Territories.

Do these Hofstra students know that about Jefferson?

But here’s the thing: Even if they do, they don’t actually care.

All these fights over monuments aren’t truly about monuments.

They’re about the eradication of America’s history, leading to the crumbling and replacement of America’s government.

Tearing down statues of Jefferson and other Founding Father greats is step one. Tearing up the documents they penned, like the Declaration, like the Constitution, is step two. And step three? Step three is subbing in another form of government under the guise of social justice and equality.

Step three is subbing in another form of government that has a name like socialism, or progressivism, or democratic-socialism.

Written by Cheryl K. Chumley for The Washington Times ~ April 2, 2019