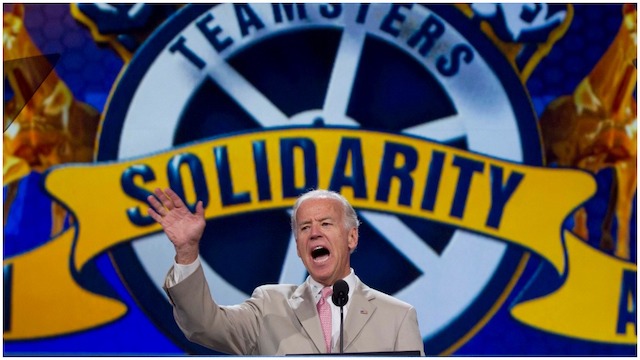 Many Americans, conservative or not, should be angry that unions now hold so much influence over elected officials and Joe Biden that the Teamsters Union, long fraught with ties to the U.S. Mafia and organized crime, is actually receiving a $36 billion dollar bailout under the $1.9 trillion dollar American Rescue Plan, after years of mismanaging and stealing from their members’ pension fund and the new revelation that the Teamsters Union pension fund was essentially insolvent. This is an act by the executive that takes the hard-earned tax dollars of private citizens to give to a group of collectivists, socialists and outright criminals whose leadership should be placed behind prison bars, instead of being rewarded by Joe Biden.

Look at the timing of this taking place on December 8th 2022, just a week after forcing a deal on the railroad unions that soured many union workers against Biden, as Sean O’Brien, Teamsters president, Liz Schuler, AFL/CIO president and Marty Walsh, U.S. Secretary of Labor stood by his side during the announcement, and it’s clear as day that this was Joe Biden rewarding his political allies, at the expense of ninety percent of Americans who are not members of any union. It also forces conservatives and independents to pay for the sort of collectivism that goes against their conscience and beliefs, as well as the very principles this country was founded upon.

A smattering of other fairly large unions are going to share in the redistribution of some $58 billion dollars, but many small unions will be left out in the cold. And one can safely bet that the beneficiaries of this political payoff and the union bosses are smiling from ear to ear, especially since the Teamsters and these other unions were looking at a sixty percent cut in the final payouts for members.

The Teamsters can blame the shortfall on inflation, poor stock performance and a fall in dues paying membership until the cows come home, but the fact remains that their union has had decades to correct this situation and clean out the thieving riff-raff criminal element from their organization, and they have yet to do so. Even while under federal investigation embezzlement schemes have flourished into the present, and long before the Covid-19 virus arrived, all of their top people full well knew the pension fund was in trouble, and why.

And yet these people seem to think they are entitled to receive this money from the taxpayers, even though they well knew for many long years that they had climbed into bed with a snake, e.g. ‘The Snake by Al Wilson. They took the wrong path with the wrong people and expected to somehow attain good results.

This is nothing less than an outrageous public relations stunt that helps an extremely small number of Americans, 350,000 Teamsters, and sets a terrible precedent that will make certain many more union leaders will be stepping forward in the days and months ahead to demand bailouts from American taxpayers too, to cover promises that pension trustees never should have been allowed to make.

Whether one views taxation as the theft of one’s wealth as many do, we have all come to accept to some great degree that at least the tax dollars going to our roads, military, schools, post offices and the general running of government has produced some good results. Even our welfare system that supposedly in place to help those who are truly unable to properly provide for themselves is seen as oriented along the lines of charity and helping people to help themselves, and it’s largely tolerated as a necessary thing.

However, these union bailouts are outright theft, pure and simple, taking private wealth from citizens to hand to other private citizens who didn’t earn it or have any right to it, no different than if a robber with a pistol took one’s wallet on the street.

The union members were all supposedly capable, working men and women of sound mind who voted for the leadership that betrayed their trust. What’s the old adage? Trust but verify. And it is obvious they didn’t give close enough scrutiny or do their due diligence when it came to protecting the earnings they placed into these pension funds.

This makes it all the more egregious, distasteful and unconscionable that these unions now come, hat-in-hand, and expecting to be made whole by the American taxpayer.

One surely must wonder, where were the oversight agents from the Department of Labor? Where were the trustees for the Teamsters Union and other unions in question?

All of this is part and parcel of what America receives under any Democratic Party led government, and it’s especially indicative of what Biden will continue to attempt through one redistribution scheme after another, unless the Republican controlled House can successfully stop him and Republicans can gain full control over the federal government in 2024. Over the past two years, the Democrats at the federal and state levels have taken on trillions of dollars in new debt and placed the future of America’s youth at risk, as they spend more to prop up the pensions of Baby Boomers, in a massive transfer of wealth to Americans over the age of fifty.

Even worse, aside from the six to seven hundred billion dollars of unfunded pension liabilities in private sector unions, the public sector union liabilities currently stand at approximately $8.28 trillion, according to a study from June 2022. This represents approximately one third of our national product, and it’s an existential threat to the national economy on the whole. There’s just not much light at the end of this tunnel, nor is it reasonable to expect that the sum total of these liabilities could ever be bailed out by the American taxpayer.

In speaking of the bailout of the Teamsters Union and any other private union recipient of Biden’s payoffs, one must note that the federal government and the American taxpayers were not party to the negotiations between union members and corporate management that created these pensions. No promises to be made whole after being conned were ever made by taxpayers and the government to these workers, who bear little blame for the theft and broken promises of their union bosses, and as such, they are not really owed anything from America or the American people.

This is similar to what transpires in communist nations. Those in the highest standing with The Party receive the best of everything and the highest rewards, while others are left to survive as best they can, much like ordinary conservative and independent American citizens whose 401K pension funds are being decimated by the raging inflation caused by Biden’s out-of-control spending.

Perhaps the 118th Congress will rightfully stop taxpayers from being forced to pay for pension promises made by the unions and corporations and rescind Biden’s madness.

1 thought on “One More Massive Socialist-Driven Transfer of Wealth”