Thoughts on Plato’s The Republic and current events. 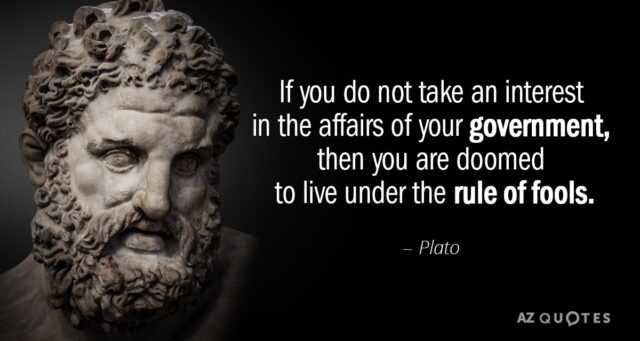 The “Young Heretics” podcast is truly an enlightening experience. In his latest episode, host Spencer Klavan talks about Book 8 and Book 9 of The Republic, where Plato talks about the decaying of a republic and, more specifically, the issue of tyranny.

After an oligarchy devolves, a tyrant rises to power.

How does this happen? An excess of freedom (i.e., hedonism) leads to a breakdown of all other forms of good. Qualities like truth, beauty, honor, obedience to the law, wisdom, and self-control are thrown to the wayside. In this exercise of absolute freedom, moral atrocities are the natural conclusion. After all, if one has the inclination to murder, then pursing the freedom to do so is the only logical recourse. Anarchy ensues.

In Book 8, the character Socrates describes the consequences of only pursuing freedom: “The father habitually tries to resemble the child and is afraid of his sons, and the son likens himself to the father and feels no awe or fear of his parents, so that he may be forsooth a free man. And the resident alien feels himself equal to the citizen and the citizen to him, and the foreigner likewise.” In other words, adults revert to the immaturity of childhood. Children became brash and disrespectful toward adults. There are no boundaries, no safeguards.

This passage is eerily similar to what is going on in the culture today. A portion of our society is trying to convince the rest of us that we have the freedom to declare genders. A portion of our society is advocating for sexual liberation in its riskiest and most dissatisfying forms, leading to corruption in our children’s innocence and transmission of certain diseases. A portion of our society is enraged that the “freedom” to abort babies has been returned to the states to decide. The current administration has essentially opened up the border and erased the safety measures put in place to protect both U.S. citizens from the invasion and these disparate foreign nationals from falling prey to traffickers and cartels. This excess of freedom is leading us to a precipice.

Enter the tyrant, who is described in Book 9 after the oligarchs have let the city descend into anarchy:

No hope of controlling the youth in any other way, they [the oligarchs or the elites] contrive to engender in his soul a ruling passion to be the protector of his idle and prodigal appetites, a monstrous winged drone. … And when the other appetites, buzzing about it, replete with incense and myrrh and chaplets and wine, and the pleasures that are released in such revelries, magnifying and fostering it to the utmost, awaken in the drone the sting of unsatisfied yearnings, why then this protector of the soul has madness for his body-guard and runs amuck, and if it finds in the man any opinions or appetites accounted worthy and still capable of shame, it slays them and thrusts them forth until it purges him of sobriety, and fills and infects him with frenzy brought in from outside.

And that tyrant, once born, enslaves everyone. Ironically, the tyrant himself is the biggest slave of all to his own desires.

After the tyrant is allowed to come to power, he demands the people succumb to his rule: “Then if the people yield willingly — ‘tis well, but if the city resists him, then, just as in the previous case the man chastized his mother and his father, so now in turn will he [the tyrant] chastize his fatherland if he can, bringing in new boon companions beneath whose sway he will hold and keep enslaved his once dear motherland.”

The radical leftists are the tyrants of thought in our society. They have substituted ideology for reality. Through Big Tech and the mainstream media, they wield the power to control and silence dissenting voices. The radical leftists are the loudest chastisers of our country, despite what President Joe Biden said in his heinous speech on September 1: “And that’s where MAGA Republicans are today. They don’t understand what every patriotic American knows: You can’t love your country only when you win.” As commentator Ben Shapiro snappily put it, “I’m sorry, Democrats have not accepted the results of a presidential election that went the other way for them since about 1988.”

Tyranny of thought can quickly turn into tyranny of action. As an American people, this is an event we must prevent if at all possible. The situational design that has pitted Left and Right against one another is not irreversible. We, as a people, need to learn how to talk to one another once again. Maybe it starts with building relationships with your community. Maybe it starts by firmly but steadfastly choosing good for our families, loving our neighbors (in the traditional, practical way of looking out for one another and caring), and living as a beacon of a life that is worth pursing.

As Plato had cause to know and as our society is slowly finding out, freedom in excess is chaos.

Written by Emmy Griffin for The Patriot Post ~ September 12, 2022

1 thought on “Griffin: The Tyrant Is a Slave to His Own Desires”