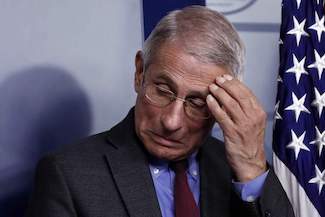 I don’t think anyone will be shocked to learn that the experts say that Dr. Anthony Fauci lied about the origins of the COVID-19 virus. Fauci claimed, under oath, that the virus was ‘naturally occurring.

Scientists testified before the Senate in a hearing Wednesday that it was an impossible claim. That wasn’t the only lie Fauci told.

Dr. Steven Quay, CEO of Atossa Therapeutics Inc., told the Gain Of Function panel that the scenario is highly unlikely, based on his research.

“There is no dispositive evidence the pandemic began as a spillover of a natural virus in a market,” Quay said. “All evidence is consistent with a laboratory-acquired infection.”

He also said he thinks release of the virus was accidental and not deliberate. He said he understands the conclusion “is not widely held,” but said he would state that under oath and would debate other scientists.

Later in the hearing, he was asked whether he was concerned about China’s continuing to do gain-of-function research.

“In December 2019, they were doing synthetic biology on a cloning vector of the Nipah virus, which is 60% lethal. We just experienced a 1% lethal virus,” Quay said. “My estimate is, that could set us back a millennium. The Black Plague was a 20% lethal event, and it was a 250-year event for civilization to return.”

The man who became Fauci’s worst nightmare, Sen. Rand Paul, spoke with Fox News’s Jesse Watters about the hearing’s findings, “We learned that Dr. Fauci has been lying to us. The three scientists agreed that this was dangerous research. Two of the three absolutely said it was gain-of-function. The third said it was dangerous research and should have gone before a committee.”

He continued, “When Dr. Fauci said, “Oh, we’ve reviewed this and the experts have looked at this, and said it’s not gain-of-function,” even that wasn’t true. There was a committee that was formed after 2017 to look at this dangerous research. They didn’t look at this research at all because they never reviewed it. So no one reviewed this to say it wasn’t gain-of-function research. They didn’t review it, period.”

Paul explained that the section didn’t end there, “We also learned from the scientists today that the committee that is supposed to review these viruses is secret.”

Adding, “We don’t know the names. We don’t know that they ever meet, and we don’t have any records of their meetings. It’s top-secret. Congress is not allowed to know. So whether the committee actually exists, we’re uncertain. We do know that they’ve met three times and there are thousands of gain-of-function research proposals.”

The Senator concluded, “So we learned a lot of things, but I think we reconfirmed that Dr. Fauci is not being honest with us. Yes, the NIH funded gain-of-function research. Yes, it was dangerous. And yes, nobody looked over this. Nobody reviewed the research. Yes, a million people died. And there still seems to be a significant lack of curiosity on the part of Democrats.”

I’m glad that the hearings are finally underway, even if it is two years later. My hope is that the proceeding will lead to criminal prosecution, or at the very least resignation—But I won’t be holding my breath.