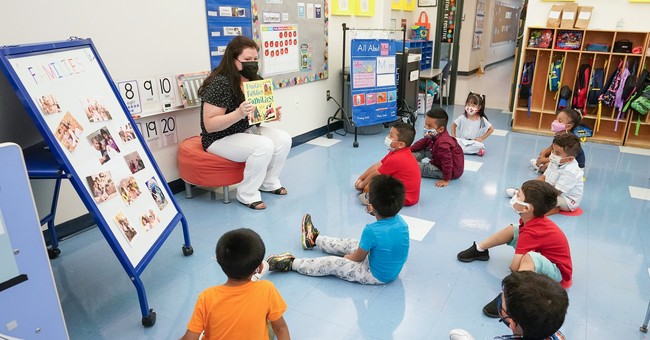 If you think pierced mutants with blue hair and gender confusion have some sort of right to leverage their position as public school teachers to groom your kids with racist Marxism and sexual confusion, you hate democracy. Schools were not established so that narcissistic strange-os with galaxy-sized daddy issues could work out their personal psychodramas using our children’s minds as props. They were established to teach our kids to read, write, do some math, and be useful citizens. And that’s what we, the People, want.

And we, the People, get to make the decision about what gets taught in our classrooms. The emphasis is on “our classrooms,” as in “not the government employees we hire to instruct classes” classrooms. I know where these people got the idea that the classrooms are their domain and we mere citizens are mere interlopers. They got it in their college education course classrooms, where they were taught that they are entering some sort of special caste by being teachers and have some sort of special claim on what goes on inside the schools that mere parents may not interfere with.

The kids are ours.

The schools are ours.

And the curriculum is ours.

Public education is not a vehicle to vindicate the feelz and thotz of the nimrods who teach in them. It’s to do the job we – the bosses – decree should be done, and nothing else. Teach our kids their ABCs and how to count.

And teach them about democracy, though the teachers clearly need a refresher. Let me help. Here’s how democracy works. We citizens decide, and you government flunkies obey. I would ask if you have any questions, but you shouldn’t. The chain of command is clear.

Citizen, followed by hireling. In that order.

I just love it when I see some mutated whiner on TikTok complaining that xe is not supposed to show videos of xis interpretative dance performance of “My Penis Confounds Me” to classrooms of second graders and how the mean old school board is cruelly repressing xis personal vision of a genderfluid future.

Yes, you are being repressed. You may not use the classroom as your personal venue for your delusional and stupid obsessions.

We call this “Democracy.” And ground zero in the fight to defend it is our local elementary.

Well, because in a democracy, other people get a say, and these goofs do not get to do whatever they please on our dime, using our facilities to indoctrinate and groom our kids.

Don’t be fooled. They are not for freedom. They are for their freedom to run roughshod over the rest of us, unaccountable and occupying the alleged moral high ground.

No, we are not morally obligated to cater to the bizarre fetishes of unaccomplished drama royalty (I don’t want to misgender anyone by using the term “queens”) who got education degrees because getting a bachelor’s in communications was too hard. And one of my majors was communications, so I am fully aware of the nature of the scam.

Time to tighten up on the teachers as a prelude to tightening up on useless public employees across the government.

Step One:
Stop pretending teachers are, as a group, people worthy of our special respect and deference. Everyone had some great teachers. I remember a couple who made a difference for me. Neither was a pinko with delusions of genderfluidity. But let’s face it – most teachers are undistinguished time-serving hacks who drone along awaiting their pension. When I think of teachers, I remember the middle school math teacher I saw stagger out of the bar half in the bag at the Denny’s I worked at. Yeah, the early eighties were lit – bars in Denny’s!

As a group, “educators” are not smarter than us, and their track record of actually educating is a trainwreck. Do you think kids today are better educated than they were 40 or even 20 years ago? Maybe in terms of pronouns and privilege, but not in anything that’s not nonsense. For too long, we gave teachers the benefit of the doubt. No longer. Now we need to give them orders and ultimatums.

Step Two:
Ban teachers’ unions. Public employee unions are a disaster anyway, but teachers’ unions are the worst. One lib teacher whining is insufferable. Hundreds of thousands banding together and funding the Democrats in return for influence is an apocalypse. It gives the worst people the most power over the most important thing – our kids’ future. Exhibit A: The COVID madness, in which the laziness and paranoia of unionized teachers stole years of our kids’ lives. Put overpaid grifters like Randi Weingarten and the rest of her poisonous ilk out of a job permanently.

Step Three:
When they called you a “terrorist” for participating in democracy, they gave the game away. Activism works. Now, we need to take it to the next level by not just going to school board meetings but by running for the school board. And we have to withstand the lies and slanders when we act. Ban CRT. Ban gender weirdness. Ban grooming behavior. Get rid of porn and propaganda. Impose pro-family, pro-American curricula in place of the Marxist dross masquerading as education nowadays. They will scream and they will shout. They will call you “Nazis,” “racists,” and “transphobes.” But guess what? They are already calling you “Nazis,” “racists,” and “transphobes.” Ignore their howls and protests; fire those who will not conform. Be ruthless – for your kids’ sake.

Step Four:
It’s not enough to clean out the current crap. We need to go old school in the schools. Emphasize that the purpose of public education is not to provide a platform for damaged people to perform their creepy vignettes. It is to teach and create good citizens. Mandate slacks, jackets, and ties for men, and slacks/dresses for women – and no, there will be no cross-dressing on campus. Nor rainbow hair colors nor studs through noses nor any other weird stuff. Our teachers are not getting paid to express themselves but to express what is normal. All that weird stuff is narcissism and attention-seeking, and that attention goes to precisely the wrong people. The people who should get attention in schools are the kids.

Step Five:
Stay Involved. When the high tide of this trend hits and the waters of weirdness starts to recede, we will be tempted to go back to not paying attention. Nope. Watch them like hawks. We need to stay activated to clean out the abscess that is our education system and make sure the woke infection never returns.

This is what democracy looks like – the citizens telling the government what to do no matter how sad it makes the government flunkies. And when they oppose us, it only reaffirms that the left hates democracy.