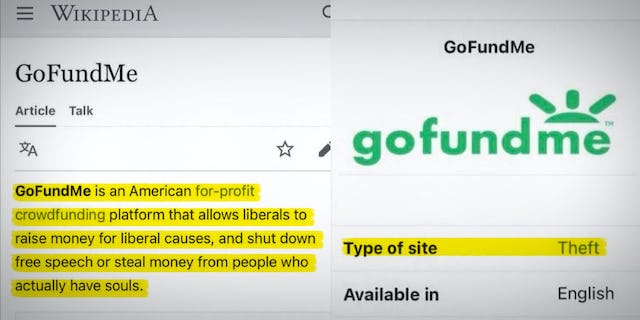 Despite the Left’s concerted efforts to shut them down, the Canadian truckers dug in all 18 wheels.

What started just over a week ago as a brushfire of Canadian freedom has now gone global — first to the U.S., and now to the Netherlands, New Zealand, and the UK. But the real story is that all this has taken place despite the worst efforts of anti-freedom leftists to crush it beneath an avalanche of misinformation and Big Tech skullduggery.

First, there was Canadian Prime Minister Justin Trudeau, who wiped off his blackface long enough to smear the truckers as racists. “Hate can never be the answer,” he said during a virtual news conference while he recovered from the COVID sniffles. “Over the past few days, Canadians were shocked and frankly, disgusted, by the behavior displayed by some people protesting in our nation’s capital. … There is no place in our country for threats, violence, or hatred.”

Then there was the predictable Nazi flag — the perfect straw man for Trudeau to both prop up and then knock down.

All this is a Big Lie, of course, and Donald Trump — among others — called out its propagators: “Facebook and Big Tech are seeking to destroy the Freedom Convoy of Truckers. The Freedom Convoy is peacefully protesting the harsh policies of far left lunatic Justin Trudeau who has destroyed Canada with insane Covid mandates.”

Even the scribes at CNBC know fake news when they read it: “Thousands of people demonstrated in Canadian cities, including the financial hub Toronto, on Saturday as mostly peaceful but noisy protests against vaccine mandates spread from Ottawa, the capital,” they wrote. “The ‘Freedom Convoy’ began as a movement against a Canadian vaccine requirement for cross-border truckers, but has turned into a rallying point against public health measures and Prime Minister Justin Trudeau’s government.”

So, two cheers for CNBC. But notice the “scare quotes” around the name of the movement: It’s not the Freedom Convoy; it’s the “Freedom Convoy.” Strange, but we don’t remember the mainstream media treating the “Black Lives Matter” or “antifa” movements with that same snarky disparagement.

Furthermore, as Power Line’s John Hinderaker quips: “When the ‘unlawful and harmful activity’ involves burning down two miles of small businesses, as the George Floyd rioters did in Minneapolis, let me know. In the meantime, it looks like the Canadian government is concerned not so much about illegal activity as about the populist threat to its own prerogatives.”

Perhaps most outrageous of all, though, was the despicable behavior of GoFundMe, a Big Tech fundraising app headquartered in Silicon Valley that steals from discriminates against conservatives and their causes. As Fox News reports, “The platform on Friday announced that it had frozen the convoy’s official campaign, offering a justification that there was violence connected to the Freedom Convoy and the protest had turned into an occupation.”

Worse yet, the platform said it would redistribute — to charities of its choice — any of the nearly $10 million in funds that had not been claimed by givers requesting a refund. GoFundMe subsequently reversed that decision. And wisely so.

Governor Ron DeSantis, he of the Free State of Florida, wasn’t inclined to stand for it. “It is a fraud for @gofundme to commandeer $9M in donations sent to support truckers and give it to causes of their own choosing,” he posted Saturday. “I will work with AG Ashley Moody to investigate these deceptive practices — these donors should be given a refund.”

As for that “occupation,” how do the hard-left hypocrites at GoFundMe explain their having promoted an appeal for the 2020 Capitol Hill Occupied Protest (also known as CHAZ, then as CHOP), the deadly insurrectionist occupation of a six-block downtown area of Seattle, which lasted for weeks on end? Or what about the countless pages fundraising for the Marxist radicals at BLM?

If it weren’t for double standards, the Left wouldn’t have any standards.