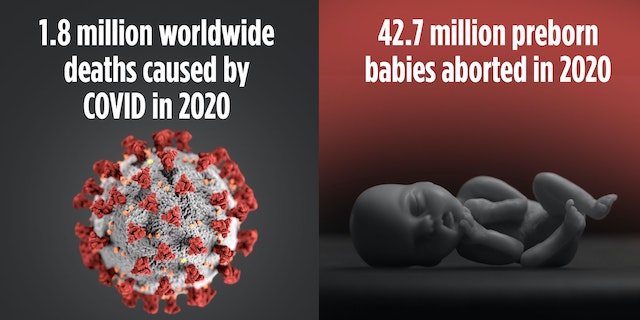 While Americans remain focused on the mounting death toll precipitated by the coronavirus pandemic, the 1.8 million worldwide deaths caused by it in 2020 pale in comparison to the leading cause of death last year. As the statistic-compiling Worldometer website reveals, a record-setting 42.7 million pre-born babies were aborted over the same time period.

In 1993, the late Daniel Patrick Moynihan coined the term “defining deviancy down” to aptly describe America’s increasing acceptance of previously unacceptable behavior. He was late to the party. The devolution of American society began in earnest in the 1960s, when the cultural revolution engendered by the Left made radical secularism the centerpiece of its cancerous agenda. In short order, assertions such as “God is dead” and all morality is “relative” began resonating, especially among younger Americans yearning to “do their own thing.”

Unfortunately – or perhaps purposefully – doing one’s own thing was somehow divorced from its logical corollary, as in one should take personal responsibility for whatever consequences arise from that thing. What emerged from the wreckage is what we endure today: Millions of Americans who promote or wallow in collective guilt, institutionalized and orchestrated victimhood, and any number of other mental gymnastics that allow one to place any and all moral failings on anyone else’s doorstep but one’s own.

In short, America is a nation where wholesale rationalization has obliterated even the most modest definitions of right and wrong.

And perhaps nothing better illustrates that devolution better than the politics of abortion. In America, a staggering 61.6 MILLION babies have been aborted since the Supreme Court’s egregious ruling in Roe v. Wade legalized the procedure in 1973. And while even some pro-lifers argue that moral exceptions can be made for rape, incest, and certain threats to one’s health, it is nonetheless undeniable that so many abortions performed in a supposedly civilized society requires a number of dubious rationalizations to precede it. First and foremost is the idea that an intentionally caused death should not be defined as such, but rather as a “medical procedure.”

In 2018, Snopes columnist Bethania Palma illuminated that particular mindset. “Stating that abortion is the ‘leading cause of death’ worldwide (as opposed to a medical procedure) is a problematic pronouncement, because that stance takes a political position, one which is at odds with the scientific/medical world,” she wrote. “The medical community does not confer personhood upon fetuses that are not viable outside the womb, so counting abortion as a ‘cause of death’ does not align with the practices of health organizations such as WHO and the Centers for Disease Control and Prevention (CDC).”

Viability is becoming increasingly “problematic” for the pro-abortion crowd. While fetal viability rates vary, medical technology has made it possible for more and more babies to survive premature births. Yet as such advancements are occurring, certain state legislatures have made it clear that abortion right up to the moment of birth is legal, under auspices that it is justifiable if a mother’s physical or mental health is imperiled.

That the “mental health” exception is flexible enough to drive a tractor trailer through reeks of political calculation. So does the contemptible notion that “personhood” can only occur in a timeframe determined by medical “expertise” – even as human life itself begins at conception. This “clump of cells” argument, in all its permutations, is the essence of a political agenda whereby pro-abortionists seek to alleviate any and all moral misgivings surrounding the purposeful termination of a life.

And not just before birth. In 2013, an article published in the Journal of Medical Ethics by authors Alberto Giubilini and Francesca Minerva asserted that “killing a newborn should be permissible in all the cases where abortion is, including cases where the newborn is not disabled.”

They are hardly outliers. The wholesale cheapening of life has reached the point where Planned Parenthood was caught harvesting baby parts and selling them – yet the whistleblowers who exposed them were convicted of substantially harming the organization, and still face criminal charges for doing so.

This contempt for human life still resonates. On December 30 in Ohio, Governor Mike DeWine signed a bill requiring that the remains of any zygote, blastocyte, embryo, or fetus left over from a surgical abortion be afforded either a burial or cremation. Lauren Blauvelt-Copelin, vice president of government affairs and public advocacy at Planned Parenthood Advocates of Ohio, asserted that such a law is “unconstitutional and medically unnecessary” and “adds yet another barrier for patients who are trying to access abortion services – which is the legislature’s real goal.”

Mike Gonidakis, president of Ohio Right to Life, had a different perspective. “Whether pro-life or pro-choice, everyone should be able to agree that the bodies of babies should never be thrown into the trash,” he stated. “The unborn victims of abortion deserve the same basic decency that we afford to all humans: a dignified burial.”

But Americans don’t agree. And in what amounts to one of the greatest ironies of modern times, those who champion wholesale levels of abortion on demand are invariably the same people who abide the destruction of historical artifacts – because the people those artifacts represent don’t measure up to today’s progressive definition of “morality.”

Planned Parenthood CEO: We’re Proud to Kill Babies in Abortions, It’s “Really Not a Big Deal”
December 31, 2020 – Planned Parenthood has become more open about its radical pro-abortion agenda in recent years as its political allies have gained power and joined it in demanding that America not only legalize but also expand and celebrate the killing of unborn babies for any reason up to birth… (Continue to full article)

In other words, those who countenance the wholesale and often capricious elimination of human life — when they’re not busy denying its humanity itself prior to viability – believe they are morally superior to those who codified the idea that human beings are “endowed by their Creator with certain unalienable Rights, that among these are Life, Liberty and the pursuit of Happiness.”

Going forward? As the revolution engendered in the 1960s has metastasized to the point where it threatens our constitutional republic itself, one can expect that 42.7 million deaths caused by abortion in 2020 alone to be dismissed as misleading, or merely as part of the panoply of “deplorable” values that matter only to “bitter clingers.”

Moreover, Americans may soon discover there is a far more literal meaning of the term “Cancel Culture” than we dare to imagine.

Written by Arnold Ahlert for The Patriot Post ~ January 7, 2021

2 thoughts on “‘Canceling‘ Humanity Itself”