Time changes NOTHING. NO matter the date of the original publication of that which follows – as with many of Granny’s posts – nothing really changes. Hopefully you are reading this for the first – or 50th time – and it finally sinks in. 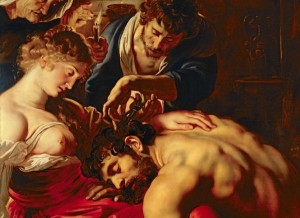 Samson and Delilah, by Rubens

August 1, 2012 ~ America was a very strong country – similar to the strength of Samson in the Bible. Samson was the strongest person on earth – all due to his God given strength.

America, like Samson, allowed Delilah (the ENEMY WITHIN) to beguile and to rob that strength by deceiving Samson with things that are against God’s Word.

As long as Samson kept his covenant with God and obeyed God he was filled with that superhuman strength. – As long as America and Americans worshipped God and obeyed His word America was strong, healthy and prosperous. Then The People began to look at other things not of God – to participate in things that were an abomination to God. They listened to the lies of the ENEMY WITHIN, they began to rely on *government* (Dagon) to provide them with monthly checks and food stamps and housing and that free sex, drugs, alcohol could be *enjoyed* without punishment.

They were blinded, like Samson, to the reality of what they were/are doing. They turned from being industrious, hard working, honest, God worshipping People and they lost their Strength and became a debtor nation with little industry to support their People. They have to IMPORT clothing – food – and anything else they need in everyday life. Totally DEPENDENT upon the ENEMY to provide for their needs. Had they remained true to God they wouldn’t have been in this mess but they forgot WHO they owed that long ago healthy, wealthy, nation. They are now slaves in their own country.

There is only ONE thing that Americans can do to reverse what is happening – only ONE thing and that is true Spiritual REVIVAL – a return to God, the Creator. Survival of America depends completely upon REVIVAL of Americans…. – REVIVAL = SURVIVAL. Failure to accomplish that means a repeat of what happened to the Philistines and their god, Dagon and that Temple they built for Dagon. America under the OCCUPATION FORCE and the ENEMY WITHIN (SATAN) has become the modern day Temple of Dagon….. and it will fall just as it did way back then when Samson took hold of the two pillars and brought it down.

The Bible records that Samson broke all of his Nazarite vows. He drank wine, he ate grapes, he touched a dead body and he did not dedicate himself totally to the Lord God. When he touched a dead body he found honey in the dead body of a lion. He scooped out the honey and ate some of it then took the rest of the honey to his parents without telling them where he had gotten it.

Samson’s great weakness was beautiful women. Samson fell in love with a beautiful Philistine woman named Delilah. Night after night he visited her residence to spend hours with her. He thought that he was hopelessly in love with her because of her great beauty and charm.

Delilah had been promised a great sum of money from the Philistines if she could discover the secret of his incredible strength. Every day Delilah teased and begged Samson to tell her the secret of his tremendous strength. To get her to stop begging him on several different occasions he told her false things that would destroy his strength He told her, “If you tie me with seven bowstrings I will lose my power.”

1. God answers prayer when He sees that we are earnest in our prayers and that we will use the victory we receive in prayer for the good of us, our families and for God’s kingdom.

2. When we have sinned and have fallen away from the will of God He will forgive us for those sins if we are sincere and confess those sins. If we have meant the prayer God will not only forgive us, but He will find a way to use us again for the good of the people and of God’s kingdom.

3. If we believe strongly in God and ask for good things to happen, even when it seems that very bad things happen they can be turned around and be used for good. This can happen if we confess to God and ask God to let good come from a bad situation.

4. Even when it seems that we have been waiting much too long for an answer to our prayers we need to be patient and wait for the answer to come.

Look around this nation today at all that is going on – then look at HISTORY of the many nations that came before us and how they fell into destruction. Ignoring that only leads to another repeat of history. Why not CHANGE your life now and place your HOPE in God?

Faith is believing in what is true. Faith has two elements: 1) being convinced of the truth, being certain of reality, having evidence of unseen things, and 2) believing, hoping in, embracing, seizing the truth.

2 thoughts on “Juntti: Samson and America – the similarities”