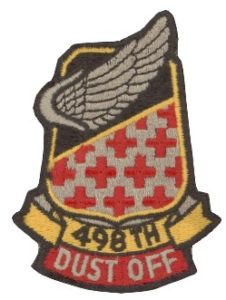 ~ Forewords ~
October 1, 2017 ~ Several years ago on a reunion trip with several of my cohorts from the rice paddies, the boys went out for lunch, while I stayed behind at the hotel in Newport, California to make some notes and write a bit of remembrance. The three of us had spoken for several years about collaborating on a book about our time together over ‘there’ – but I began to realize that both of the guys were bullshit artists, and really had no desire to follow through, and so I decided to write a preface – to what I hope would become my story about the twenty-one months I spent in the Far East – VietNam. What came out of that several hours of peace, can be read HERE. I would highly recommend that you read it before you continue… but – at your discretion…

As for now – we pick up where we left off… ~ Jeffrey Bennett, Publisher and Veteran

June 6, 1968: … and so my journey with the 498th Dust Off Company began. Within days I volunteered along with Dave Banks as a crew-member of one of the most elite Med Evac Units in-country. Reading books years later I was surprised at the reverence paid by other groups of our type to our group.

“Volunteered? What the hell for Bennett? Didn’t you know that you were putting your life in the line of fire?” Well – I guess that I was too naive to have given that a second thought, but I recall that while stationed in Germany, I had had an opportunity to participate in a one day mission n a helicopter (for flight pay) – and fell in love with this form of flying. Of course – the circumstances were considerably different – or so I was to discover.

Dust Off units were a bit unlike traditional Med Evac (ME) units. ME’s typically would retrieve American military and support members – including allied troops – who had been wounded in action – and transport them to medical aide stations or hospitals. Dust Off units would pick up any wounded individual – including enemy combatants (captured) to render the same services. Under the guidance of Col. Robert Scott – we did our duty and did it proudly. 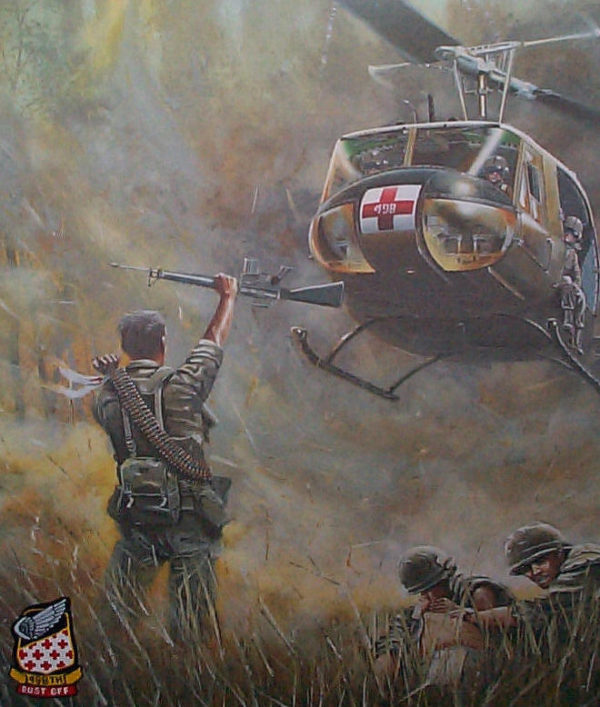 Among the first people I met upon landing at Lane Army Heliport, was a guy who claimed that he was from Chicago, so because I was from that area – he figured that we had much in common and would become good friends. We got along – for awhile – but eventually were at each others throats – because frankly – Keezer was the kind of imbecile who could get people killed. Actually – Roy was from Peoria – and that ain’t Chicago. Nope – Brother Banks was the guy that I would tie to. I wish that I knew where he is today…

Faces flash before me to this day, but names escape me, but a few – ‘Frenchie’ Lemieux, and Tom Fernow, Dunlap and the Brutha’s down by the fire-barrel, Dumont and the other boys from Pennsylvania, and that ignorant black-land farm boy from MIssouri who had been raised to believe that ‘colored folk‘ went blind when the sun went down. These are the few who come to mind at this late hour. Maybe it’s time to pull out the slide show once more…

Oh yes, I nearly forgot – two of the main reasons for this post – Raymond Schacht, who was not only the best man at my wedding some 47 years ago, but has been my accountant and legal council for about 40 years. And of course, our bartender – the ice-man – Leonard Kizirian who found us quite by accident nearly ten years ago, because of a piece I had written, correcting major errors regarding the death of one of our pilots… but that is a story for another chapter.

Raymond (Smoove) and I have gotten together nearly every year since 1970. Leonard began to join us about six years ago (although I was forced to pass on the reunion in 2017) for a week or so. Why do we get together? Not much remembering our experiences in-country – but to celebrate our lives, eat well and just kick back – and sometimes, just soak up the sun and watch the laps of the water on the shoreline of the Pacific Ocean – knowing – that so many miles across that ocean – is where our journey began. In the back of my mind is always Christopher Lucci and that damned piece of chicken.

I guess, that in may respects, we have been among the lucky ones, or were we??? 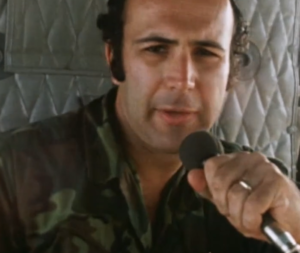 Late during the week of September 25, 2017, two pieces of information came across my desk; one was a critique of the PBS – Ken Burns documentary, The Vietnam War written by Terry Garlock. The eighteen hours series has I am sure been watched by many, and purportedly includes interviews with many of our brothers who served in that action as well, but has subsequently been panned by a good number of other Veterans, who claim that the series serves an entirely different agenda – not truly through the eyes of those of us who lived it.

The second item which crossed my desk – was something fleeting – something that just flashed before my eyes, but something I was meant to see – another documentary…

I have watched the original film of the broadcast by CBS News’ Morton Dean in January of 1971 – one year after I left. I have subsequently gone to You Tube to watch a badly worn out version of that original film. Apparently someone at PBS felt the need to air this one-hour documentary during the same month as that of the Burns series. Thank you – whoever you are – for what I saw last Friday evening elicited many emotions from deep within me – and I smiled, and I cried…

Needless to say, what you about to watch is OUR story – not just mine and Raymond’s and Leonard’s – but a warm, tense (at some times) and loving story of ALL of us who share a bond, which no one who had not “been there” could ever understand. THIS is our story – the story of the Viet Nam veteran. (NOTE: The Morton Dean documentary has been blocked in the US, hence – a replacement vidoe has been posted 2/15/2020 ~ Ed.)

Welcome home to all of my brother’s and sisters who served.

And to Morton Dean and Greg Cooke (Dean’s original cameraman in Vietnam) – you truly are one of us. Thank you for remembering.

Who Am I? American MedEvac – Dust Off

~ the Author ~
A veteran of Viet Nam, student of history (both American and film), Jeffrey Bennett has been broadcasting for over two decades as host of various radio-satellite and internet based programs and has been considered the voice of reason on the alternative media – providing a unique and distinctive broadcast style, including topics such as your Financial, Physical, and Spiritual well-being, education, news, Federal and local legislative issues, which will affect our future, political satire (with a twist), and editorial commentary on current events through the teaching of history. Through The Book Shelf, Bennett has published numerous books on American History – TRUE history – not re-worked, altered history. The Book Shelf has also published books for unknown authors, whose dedication to truth – stands alone.

Jeffrey is the founder and CEO of Kettle Moraine, Ltd. Publications, which is the host and developer of numerous websites, including the Metropolis Café, Dr. Kelley’s Victory Over Cancer, The Book Shelf, Morgana Precious Metals and The Federal Observer – a daily on-line publication, which co-authored and spear-headed a petition, which ultimately caused new legislation to be signed by President Bush within 450 days of the events that rocked our world on September 11, 2001.