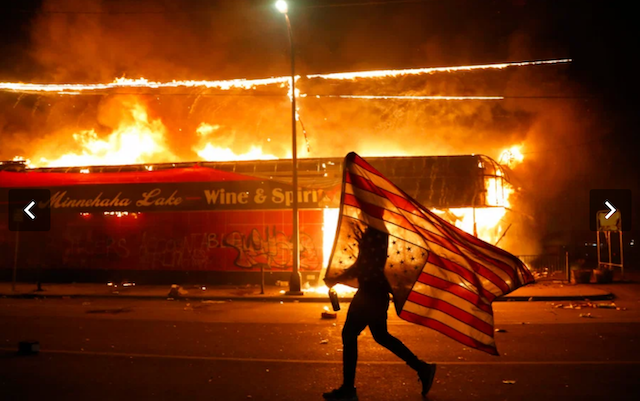 When rioters burned South Central Los Angeles to the ground in 1992, they at least had the decency to wait for due process to run its course. No such luck, however, with the looters, anarchists, arsonists, thugs, and imported agitators currently running roughshod over South Minneapolis.

Thankfully, Minnesota’s largest city has so far been spared the death and destruction that visited LA nearly three decades ago. But things are far from quiet in the wake of George Floyd’s deeply disturbing death at the hands of four Minneapolis cops Monday night.

How bad is it? As the Associated Press reports, “Cheering protesters torched a Minneapolis police station Thursday that the department was forced to abandon as three days of violent protests spread to nearby St. Paul and angry demonstrations flared across the U.S.”

It’s a sad sign of the times that our law-enforcement personnel and institutions are now the target of lawless behavior rather than a reliable force for putting it down. And it’s another sad sign that our mainstream media no longer refers to rioters as “rioters.” Instead, they opt for the more genteel “protesters.” As George Orwell himself put it, “Political language is designed to make lies sound truthful and murder respectable.”

Speaking of murder, we should focus for a moment on the cause of all this — namely, the indefensible actions of one Minneapolis cop and three cops-turned-bystanders. As Fox News reports, “Derek Chauvin, the Minneapolis police officer caught on camera kneeling on the neck of George Floyd as he gasped for air, has been the subject of 10 conduct complaints and three police shootings that led to no disciplinary action during his 19 years on the job.”

RELATED ARTICLE: A Fatal Police Tactic Does Not Mean the Entire Justice System Is Racist

Suffice it to say that Chauvin’s record seems troubling enough without the help of Trump-deranged social-media sickos who couldn’t wait to begin circulating a fake photo of a man who looked like Chauvin wearing a “Make Whites Great Again” hat.

As for the lack of disciplinary action meted out against Chauvin over the years, it may well be that he conducted himself lawfully in every instance. Or it may be that the state’s top prosecutor was simply incompetent, or lacked sufficient fortitude, or both. That prosecutor’s name? Minnesota Senator and former Democrat presidential candidate Amy Klobuchar, who’s rumored to be on the short (and getting shorter) list of Joe Biden’s potential running mates.

Biden has, of course, pledged to put a woman on the ticket — which would likely disqualify Reverend Al Sharpton, the race-baiting agitator of Tawana Brawley and Freddie’s Fashion Mart infamy who showed up in Minneapolis yesterday to foment a nationwide “We Can’t Breathe” movement.

Somehow lost on Sharpton (and the mainstream media) amid all the strife in Minneapolis, however, are the killing fields of Southside Chicago, which saw its deadliest Memorial Day weekend since 2015, and bloody Baltimore, which weighed in with seven shooting deaths of its own.

It’s understandable that, for the moment, Minneapolis is sucking all the oxygen out of press rooms around the country. But there’s still much to be said about the misplaced priorities of the Left, about the failure of Democrat leadership in our nation’s urban areas, and about the runaway death tolls in cities with the strictest gun-control laws in the land.

Perhaps it’s nothing that we haven’t already been saying for years.

Written by Douglas Andrews for The Patriot Post, May 29, 2020