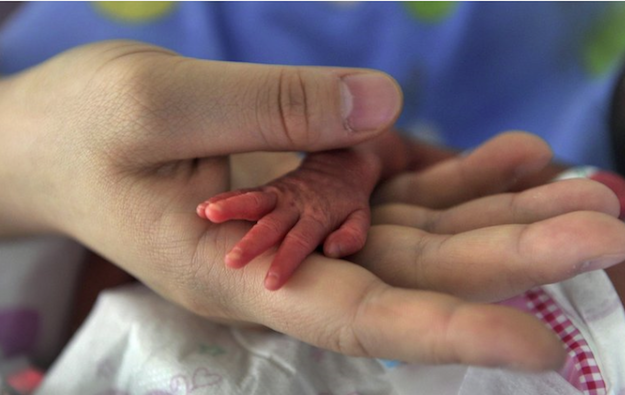 On Friday (September 26, 2016), abortion survivor Gianna Jessen told a U.S. Congressional panel how she was born alive after a botched abortion and survived because of a nurse who called an ambulance.

Some babies have not been so fortunate…

While some abortion activists claim that babies do not survive abortions, various accounts confirm that some do. The fortunate ones receive medical care in an attempt to save their lives, but the unfortunate are abandoned to die.

Earlier this year, a baby was born alive after a botched abortion in Phoenix, Arizona, according to local news reports. The baby was transferred to a local hospital for care, but he or she did not survive.

This week, Live Action News reported another tragic case involving a baby who was born alive after a botched abortion nearly 30 years ago. Pro-life blogger Sarah Terzo uncovered the baby’s story as told by a nurse who witnessed his birth in 1987 in France. The story came from a 2015 document “Late Term Abortion & Neonatal Infanticide in Europe: Petition for the Rights of Newborns Surviving Their Abortion” by the European Centre for Law and Justice.

Mrs. L.M., a former anesthetic nurse, describes what took place when a 28-week-old baby was born alive during an abortion in France. The abortion took place in 1987. The mother was HIV positive. L.M. says:

It was in a maternity of Paris suburbs (South) in 1987. I was an anesthetic nurse at the time and I intervened in monitoring the epidural composed by the Anesthetist…

Gynecologists convinced [the mother] to abort but the baby was born alive. Midwives simply put it in an empty box, naked in a stainless steel tub, cold, without any care. His mother was conscious during labor and delivery of the baby; she was crying and wanted to see her little one but the doctors decided that this child should die. They did not give the child to the mother to spare her. This baby was viable, he was breathing on his own and cried vigorously. I honestly think it was just left to die of cold … it was horrible…! We were harnessed in our gloves, overshirts, headwear, masks, “overshoes” because we were afraid of getting AIDS, and the baby, naked, abandoned by all, and so vulnerable. He took a long time to stop whining.

The nurse said she wanted to do something to help the baby boy, but she did not. However, the incident profoundly affected the nurse, and she never participated another abortion, according to the report. The nurse said she “could not stand” being involved in abortion on demand anymore.

Terzo related to the story because of her own premature birth at 28 weeks in 1975.

“I survived with no immediate health problems, and was one of the older babies in the ICU,” she explained. “Babies born even more premature than I was were treated, and survived. This baby would have had a good chance of living if medical care had been given.”

Federal lawmakers currently are considering a bill named the Born Alive Abortion Survivors Act, which would strengthen requirements involving care for babies who survive abortions. The legislation would require health care practitioners to provide the same level of care as reasonably provided to any other child born alive at the same gestational age. However, abortion activists are fighting against the bill.

Jessen and another abortion survivor, Melissa Ohden, both have testified in front of the U.S. House and Senate in the past year, urging lawmakers to pass the bill and protect babies like themselves who survive failed abortion attempts.

“Many Americans have no idea that babies can even live through abortions and are often left to die. But this does happen,” Jessen testified last week. “I know this because I was born alive in an abortion clinic after being burned in my mother’s womb for 18 hours. My medical records clearly state the following: Born during saline abortion/April 6, 1977/6am/2/1/2 pounds.”