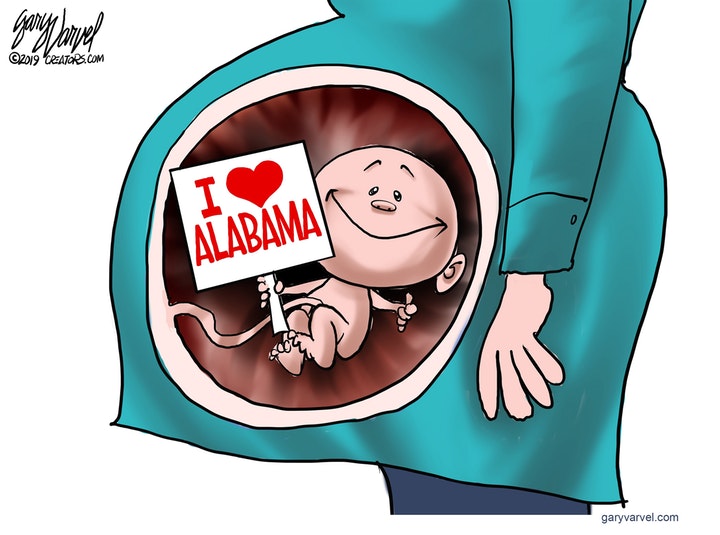 Alabama lawmakers passed a bill on Tuesday banning nearly all abortions, including those in rape and incest cases.

The 25 to six vote makes it the most restrictive anti-abortion measure passed since pro-life campaigners were defeated in the landmark Roe v. Wade case in 1973.

That ruling stated that depriving women of the right to an abortion except to save the mother’s life was unconstitutional.

Under the Alabama bill, the only exceptions are to safeguard the health of the mother, while doctors could face 10 years in prison for attempting an abortion and 99 years for actually carrying out the procedure.

The bill was previously approved by the Alabama House of Representatives and will now go to Republican Governor Kay Ivey, who has withheld comment on whether she would sign it but generally is a strong opponent of abortion (senators speak during a state Senate vote on the strictest anti-abortion bill in the United States)

The bill will now go before Republican Gov. Kay Ivey, who despite not having publicly committed to signing the legislation, is seen as strongly opposed to abortion and is expected to sign the bill into law.

The law would take effect six months after being signed but is certain to face a legal challenge from the American Civil Liberties Union and other groups who have vowed to sue.

The bill comes as part of a multi-state effort to have the U.S. Supreme Court reconsider a woman’s constitutional right to an abortion.

Legislation to restrict abortion rights has been introduced in 16 states this year, four of whose governors have signed bills banning abortion if an embryonic heartbeat can be detected.

Georgia recently signed into law the so-called heartbeat bill to outlaw abortion after a fetal heartbeat is detectable – typically around the six week mark.

The Alabama bill goes further, banning abortions at any time. People who perform abortions would be subject to a felony, although a woman who receives an abortion would not be held criminally liable.

The Republican-controlled Alabama Senate also defeated a Democratic amendment that would have allowed legal abortions for women and girls impregnated by rape and incest.

Anti-abortion advocates know any laws they pass are certain to be challenged, and courts this year have blocked a restrictive Kentucky law and another in Iowa law that was passed last year.

But supporters of the Alabama ban said the right to life for the unborn child transcends other rights, an idea they would like tested.

Republican Senator Clyde Chambliss, arguing in favor of the Alabama bill, said the whole point was ‘so that we can go directly to the Supreme Court to challenge Roe versus Wade.’

The high court, now with a majority of conservative justices after Republican President Donald Trump appointed two, could possibly overturn Roe v. Wade – something that would prove seismic in the fight between pro-life and pro-abortion campaigners.

Republican lawmaker Terri Collins, sponsor of the legislation, said: ‘Our bill says that baby in the womb is a person.’

Just this year, Mississippi, Kentucky and Ohio have also outlawed abortion under the heartbeat law.

Democratic state Senator Linda Coleman-Madison called the Republicans hypocritical for advocating small government that ought to stay out of private matters but ‘now you want in my womb; I want you out.’

Actress and activist Alyssa Milano has called for a sex strike under the social media hashtag #SexStrike.

It comes in response to the campaigns against abortion rights, urging women to refuse sex with men ‘until we get bodily autonomy back.’

The anti-abortion measures taking effect around the nation have prompted support and disgust in equally fervid measure.

The heartbill bill was thrown into stark focus again when it emerged an 11-year-old in Ohio who allegedly became pregnant after being raped by a 26-year-old would have no right to an abortion under the new state legislation signed into law last month.

Ohio passed the bill banning abortion in April. As the bill will not come into effect until July, the victim, who cannot be named, will be allowed to have abortion if she chooses, but thousands of other victims will soon be denied the same right.

The legislature also means many women will only discover they are pregnant after the time period for a legal abortion has passed.

The case has raised serious questions about the so-called ‘heartbeat bill’, which four other states have passed so far.