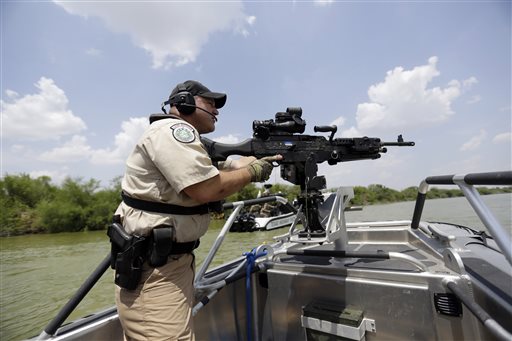 Lock and Load – FIRE at Will!

It is plumb damned outrageous to me that the American people aren’t on the steps of the White House and the Capitol Building demanding that they immediately close down the border and start shipping all 30 to 40 million illegal aliens out of the country.

At this current rate of invasion, people need not complain when America is completely driven under and looks like a Third World Banana Republic. Their silence and complete inaction on this issue makes me believe that by and large, they just don’t care, or they’re fine with seeing the nation overrun by the barbarians.

Yes. Angry and disgusted are the only adjectives to describe how I feel whenever I bring myself to assess the situation. I’m plumb damned sick to my stomach and sad for the next generations that will have to suffer the full and final consequences of this despicable, reprehensible lawlessness and treasonous powerplay by the new amerikkan communists sitting in the White House and Congress. ~ J.O.S.

Disgusted and Angry to the Core

Disgusted and angry to one’s very core. That’s what all American patriots should be who see the all out invasion of America by millions of illegal aliens, as hundreds of thousands and many millions are making the journey to our Southern Border right now.

It seems as though Americans are so weak on the whole that they simply sit back, unwilling to raise a furor or gather en masse along the border to stop this incredible mounting catastrophe for all America, for surely they can see the lie behind the Biden regime’s assurances via Homeland Security Secretary Alejandro Mayorkas that the border is secure. Thousands of more illegal aliens from all over the world have been massing in line at the El Paso port of entry alone, since last Sunday, December 11, 2022, and yet, still little or next to nothing from the general public.

At least the people of Croatia and Hungary had the backbones to gather along their borders to erect barriers and push back on illegal Muslim immigrants who were fleeing the war torn Middle East in 2015. And they were only getting a fraction of migrants that America is receiving today.

Pass one law. Pass a hundred laws for the purpose of stopping illegal immigration and securing the border. It won’t mean a damned thing, since these new amerikkan communists under the banner of the Democratic Party and a lawless Biden regime are already willfully breaking existing, perfectly good U.S. immigration law — good when it has actually been followed in the past — in order to purposefully undermine America and create a society that rejects America’s founding principles in favor of a socialist authoritarian government.

Although the Biden regime has touted some two million encounters of stopped and returned illegal aliens under Title 42 and Title 8, the reality is that this regime has simply paid it lip-service and refused to follow even these legal paths properly, with over two million entering America each year that Biden’s people have been in control — 2.76 million in fiscal year 2022 — along with more than one million “got aways” entering over this period — closer to two million by other estimates. From the earliest days of his administration, Biden has fought to end Title 42.

Just what are traditional freedom-loving Americans to do, when those elected officials charged with defending and protecting America refuse to do their duty? They’re witnessing it now, from the highest office in the land on down to lesser offices, as seen in the case of Arizona’s Cochise County Sheriff and Governor-elect Hobbs, who both intend to tear down the double stacked container “wall” that outgoing Governor Ducey erected along Arizona’s Southern border, contending it’s “federal land” and dismissing the fact that under the Constitution, all states have the right to defend themselves against an invasion.

What are normal America-loving people to do when they see activist commie judges supporting and legitimizing the many illegalities surrounding Biden’s Open Borders Policy by way of flagrant, outlandish, arbitrary and erroneous rulings that actually break righteous U.S. law?

When Title 42 ends on December 21st, this problem will become even more massive and catastrophic for America, with immigrant shelters already running at full capacity and local and state budgets straining to carry the added cost of feeding, clothing and sheltering these people, and, in too many instances, transporting them into the interior of America. And exacerbating the problem to an exponentially higher degree, the Mexican authorities have recently been assisting the illegal aliens in their journey to the border, by sending twenty busloads of illegal aliens into Ciudad, Mexico, which is directly across the border from El Paso.

Let’s not forget that scores of organizations on both sides of the border are now known to be facilitating the movement of these hordes of illegal aliens from start to finish, as illegals from Afghanistan, Ukraine, Cuba, Venezuela, Haiti, Nicaragua, Honduras and many other nationalities are finding their way into America without any passport or right to be there. Agencies like Catholic Charities, Pueblo Sin Fronteras, International Rescue Committee, Casa Alitas, Mission Border Hope and many others are all acting in tandem and in one massive movement to create this humanitarian crisis on America’s Southern Border, and then they step back to point their fingers at America, as if to say we cannot refuse to accept any of them.

Rapes. Murders. Child-trafficking. Millions of dollars of fentanyl and methamphetamine. The stats on the worst products of the human condition are damning enough to warrant tough action on border security.

Border Patrol are in a Catch-22 situation, where they must choose between following the Constitution and actual immigration law or arbitrary policy rules following an agenda meant to destroy the republic. It would seem to be a no-brainer for any patriot, but too many feel they have too much invested in the job to risk being suspended or fired, if they actually do their jobs and detain illegal aliens for judicial review or prosecution and deportation. Perhaps a few million armed patriots appearing along the border areas might give them enough moral support to actually refuse the Biden regime’s orders.

Our system isn’t broken. It’s been torn down and torn apart with malice and intent aimed at overloading all respective state’s systems and forcing a unified cry out for federal relief, to which the Democrats will throw trillions of taxpayer dollars and further overload the entire nation, in hopes it will create a demand for an even bigger federal government with their cronies at the helm.

Biden was actually in Phoenix, Arizona on December 6th to deliver a speech at a semiconductor plant. But he couldn’t be bothered to go and assess the mess of humanity struggling to force its way across the Southern Border, and when asked about it, arrogantly as ever, he stated, “Because there are more important things going on.”

One should note that there’s nothing more important than defending and protecting the national sovereignty of America and all of our borders. There’s nothing more important than defending the common language and culture of one’s nation, the founding principles. Unless one is an anti-American amerikkan communist and someone cut from the same flawed, unclean cloth as Joe Biden.

It’s unfathomable to think that out of an adult population of approximately 258 million American adults there isn’t a million or more armed Americans, or even a few hundred thousand, who can’t or won’t make the time, or don’t have the strength of will and desire to go to the border and make these illegals stay on the Mexican side.

If some of the turncoat Republicans, e.g. Tom Tillis and Susan Collins, have their way, we’ll see some 30 to 40 million illegal aliens in America eventually granted amnesty, further changing the face of America and our culture forever, while playing into the hands of the Democrats who no longer hold any love for America.

Someone must stop this border insanity sooner than later. If the American people cannot seat people in elected office with a will and a mind to do so, it just really might fall to those American patriots left with strong enough minds and hearts for the fight, at some point in the not too distant future, if we are to save this nation further economic destruction and the American people further suffering from the many ills that have come to them through this madness.

We either garner the will in earnest to secure our borders and deport all illegal aliens, or we will lose our country. We will see the end of America.

2 thoughts on “Smith: We Will See the End of America”