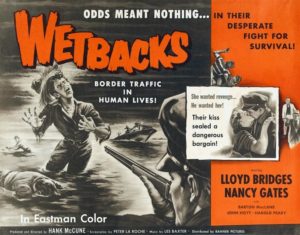 Back in the 1950’s, when Americans were not pre-programmed to be politically correct, General Dwight D. Eisenhower and his Staff conducted Operation Wet Back. They used US Army and Federal Agency personnel to sweep through the Southern and Western States and remove all undocumented aliens back to their countries of origin. If I recall correctly, more than a million people, mostly South American in origin, were ultimately returned home.

They were returned home and the home country got a stern warning: you are responsible for the care and conduct of your own people within the international community. We respect your borders. You respect ours.

And that was that. No crisis. No political Flim-Flam. No Mexican flags flying above the American flag in LA. No pretense that “treaties” signed by unhinged members of political parties have anything to do with us and our States and our People and our land and soil. No South American Gang Members being allowed to come here and cause trouble.

Threat to our security. Boom. End of that problem.

Eisenhower performed the duty owed by the Territorial United States Government and the U.S. Military and the Commander-in-Chief to protect and defend our land and soil against any kind of invasion – without fanfare, without apology, without political correctness, and without a nod to the Municipal Congress, either.

So now here we are, the actual States of the Union, flexing our muscle and making visitation upon our erstwhile Federal Employees. Consider it a Surprise Inspection after a 150 years, but here we are.

We find that Donald Trump is attempting to do his duty, but various members of the Joint Chiefs and PENTAGON are having difficulty understanding exactly what their duty is and who is owed Performance under the contracts, treaties, and agreements which allow their own existence as “Persons” and which delegates the empowerment they exercise in our behalf.

So here it is, boys, spelled out in black and white.

Anything and anyone that threatens us and our well-being, whether foreign – like the hordes of illegal immigrants — or domestic, like renegade members of Congress – you are under absolute obligation to protect us, our peace, and our well-being.

So, as you can now see, it is all very simple. You all do your duty to the Public Law and the States and the People of this country, or – what good are you? Exactly what do we need you for?

We’ll fire your flat rumps and hire someone else who will do the job we hired them to do. We’ll suspend your pensions for Dereliction of Duty. We will Dishonorably Discharge the whole General Staff. And we won’t blink or be acting guilty or apologizing or being politically correct about it, either.

Better get on board. The Ship of State is sailing.