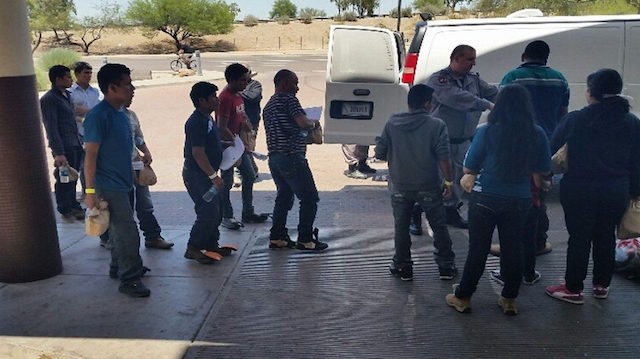 The Justice Department is suing Arizona over a law that is slated to take effect next year that would require voters to provide proof of American citizenship to cast ballots in federal elections.

In a court complaint filed Tuesday, the DOJ alleged House Bill 2492 violates the National Voter Registration Act of 1993 and the 1964 Civil Rights Act.

The law is slated to take effect in Jan. 1 2023. The complaint alleges the law would throw thousands of voters off the rolls.

“For nearly three decades, the National Voter Registration Act has helped to move states in the right direction by eliminating unnecessary requirements that have historically made it harder for eligible voters to access the registration rolls,” said Assistant Attorney General Kristen Clarke of the Justice Department’s Civil Rights Division. “Arizona has passed a law that turns the clock back on progress by imposing unlawful and unnecessary requirements that would block eligible voters from the registration rolls for certain federal elections.”

Arizona Gov. Doug Ducey signed H.B. 2492 into law in March. At the time, he said the law would prohibit “any attempt to illegally cast a vote.”

He called it a “balanced approach that honors Arizona’s history of making voting accessible without sacrificing security in our elections.”

RELATED: Biden’s Bid to Take Over Our Elections

An Arizona ballot measure in 2004 allowed officials to ask for proof of citizenship for anyone registering to vote. A provision in the measure was eventually struck down by the U.S. Supreme Court.

In its court complaint, the DOJ said the new law also violated a 2013 high court ruling related to another Arizona lawsuit, saying the state can’t require prospective voters using the federal form from submitting anything than the form requires, such as proof of citizenship.

“In addition to free rooms and transportation for those illegally entering our country, the DOJ now wants to give them a chance to vote,” he said in a statement to Fox News Digital. “It’s another round of Brnovich v. Biden. I will once again be in court defending Arizona against the lawlessness of the Biden administration.”