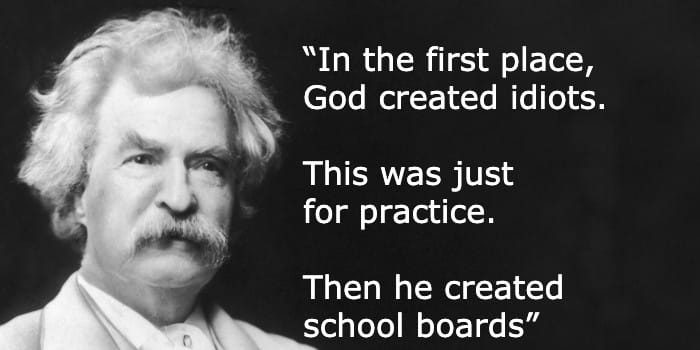 When I was a newspaper reporter in the 1970s, I covered several local boards of education. Board members were ordinary people who wanted to make sure their communities provided a decent education for their children. By and large, it was a calm, peaceful, humdrum process.

There was the occasional controversy. Maybe an old school had to be closed, because it wasn’t worth the money to keep repairing it, and a new one built to replace it. This could lead to some pretty lively public meetings. Or maybe some “expert” down in Trenton would recommend the schools provide sex education curricula. Then the parents would show up to the next meeting and gently persuade the board not even to try doing this; and that would be the end of it.

Two forces rose up to change this…

… a power-grabbing New Jersey Dept. of Education, founded in 1945 and now feeling its oats, and money-grabbing teacher unions, established in the 1960s.

Bit by bit, the DOE took over the running of New Jersey’s schools. From time to time, the unions would launch a teachers’ strike for higher pay and benefits. With their hired consultants, lock-step unity, and increasingly large war chests, the unions usually won these public relations battles. Children were prompted and coached to go to board meetings and plead, “Oh, please, don’t fire our beloved teachers!” The school boards usually caved.

By the mid-Seventies, the state was dictating to the local boards, which had no power to resist. Whenever the public voted down the school budget, the state almost always restored the cuts. And the unions got richer and richer, allied themselves to the Democrat Party, and began making demands of their own.

And school boards gradually turned into the satraps of a kind of Great King down in Trenton, and began to view the people who elected them not as citizens, but subjects. “Hey! We’re the ones who know what’s best for children! Stuff the parents.” And why not? They were there to do the state’s bidding, they were there to keep the unions happy. Trenton could cancel any decisions they made that weren’t politically correct. And of course we now had a U.S. Dept. of Education that was even more demanding. Remember “Common Core”?

Now we have local school boards whose members meet in secret and, egged on by the unions and the state, routinely plug in such abominations as Critical Race Theory, “comprehensive sex education” (don’t even ask), promotion of “transgender” propaganda, and stocking the school libraries with what can only be described as filth. And parents, the undefended taxpayers who have to fund these orgies of misgovernment and educational malpractice, can’t object without the school boards running to the federal Dept. of Justice and having the parents branded as “potential domestic terrorists.” Some objecting parents have even been arrested on the spot – for questioning their school board.

Vote them out, and you only get more satraps. Any local board that tries to stand up against the state and federal governments, and the unions, usually gets crushed. I should mention that it’s never been hard to get elected to the school board. I knew a man in Union Beach who was elected to the board when five of his friends wrote him in as a prank.

What can we do?

The only thing we can do that will mean anything, that will have any positive effect, is to pull our children out of public school and educate them at home. This year, the number of families homeschooling their children increased four times over, the biggest increase ever.

America needs more homeschooling, not less. Public education has become Far Left Crazy’s favorite indoctrination mill, with the colleges and universities finishing the job. Today we have more alternatives to public schooling than we’ve ever had before. Let’s use them to empty out the classrooms.

Kill public education, and the Far Left in America… dies for lack of nourishment.