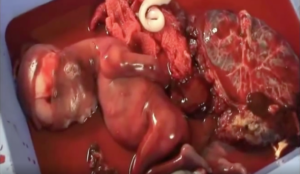 We are passing an important landmark for abortions in this country since Harry Blackmun helped determine that fetuses had no rights. Sixty two million fetuses have had their tenure in this life terminated since he wrote Roe vs. Wade.

For everyone’s review here is a brief list with descriptions of the major techniques that are used.

First is the suction aspiration, or “vacuum curettage. A suction tube with a sharp cutting edge is inserted into the uterus through the dilated cervix. The suction dismembers the body of the developing baby and tears the placenta from the wall of the uterus, sucking blood, amniotic fluid, placental tissue, and fetal parts into a collection bottle for disposal.

The major complication is puncturing of the uterus & hemorrhage. The uterus and other contiguous organs could also be infected, necessitating hysterectomy, oophorectomy and salpingectomy.

Another method is dilatation and evacuation. The cervix is dilated and then a forceps is inserted into the uterus. Then one or several of the fetus’s limbs is grasped with the forceps and torn away from the rest of the body. Piece by piece, the entire fetus is removed. Blood from the placenta and the fetus with recognizable arms, legs and torso cascade out of the vagina. Sometimes the skull is resistant and must be crushed or sliced, a catheter inserted and the brain sucked out so the skull can collapse and not block extrusion.

Witnesses have been known to pass out during these procedures. It is impossible to deny that life is being terminated. Naomi Wolfe, an abortion advocate, has stated that. 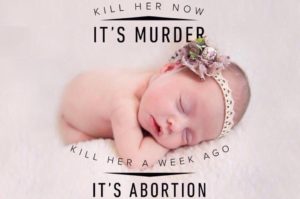 In this case, nature tries to make the amniotic fluid the same salt concentration same as the woman’s body fluids. To do that, water crosses from the body into the amniotic sac to dilute the concentration of the fluid within. As a result, the sac expands and the uterus goes into premature labor and extrudes the fetus within the sac. That usually takes more than 30 hours.

For its part, the fetus reacts to this highly concentrated salt solution by twisting and trying to get away from it but it can’t. It has the same sensation a living human would have if it got salt in its eyes. The fetus’ problem is that it’s all over the body. The baby breathes and swallows the concentrated salt solution and its lungs and intestines suffer the same sensation. It usually dies within one hour.

There is also the Dilatation & Extraction or D&E. It’s also known as the partial birth abortion. The abortionist uses a forceps and pulls the body of the baby from the uterus and into the vagina but leaves the head inside the womb. Then the abortionist cuts into the back of the baby’s skull, inserts a catheter and sucks baby’s brains out. The collapsed head is then removed from the uterus. (Dr. Josif Mengele would be proud.)

Then there’s the old reliable hysterotomy. The abortionist simply incises the abdomen, as if doing a Caesarian section, cuts open the uterus and removes the contents, the amniotic sac, fluid, fetus and placenta.

Which choice do pro-choicers prefer?

Dr. Roderick T. Beaman is a board certified family osteopathic physician who practices in Jacksonville, Florida. A native born New Yorker, he is happy to be out of that pit of liberalism. A libertarian with little use for government, he is the author of an on-line piece that won a Ron Paul Liberty in Media Award. He also is a composer, in addition to a long time writer for Kettle Moraine Publishers..

1 thought on “Beaman: Choices for Pro-Choicers”