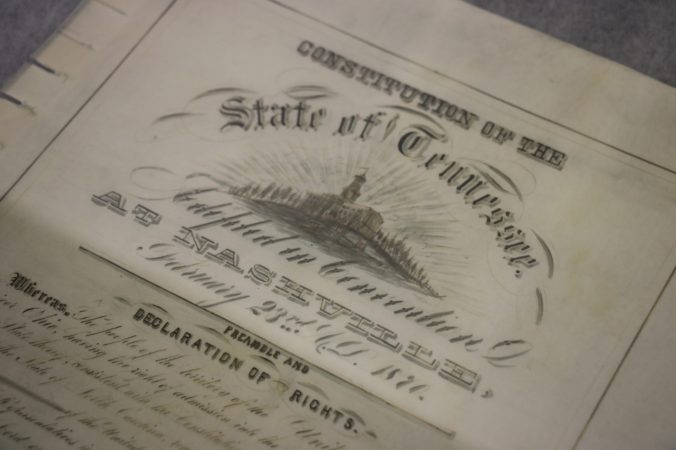 January 30, 2006 ~ I have a copy of the Tennessee Constitution and The Constitution of our Country. Nowhere – NOWHERE – do I see any mention of *Lobbyists*.

I did find this:

“Congress shall make no law respecting an establishment of religion, or prohibiting the free exercise thereof; or abridging the freedom of speech, or of the press; or the right of the people peaceably to assemble, and to petition the government for a redress of grievances.”

I do not find that any other than THE PEOPLE have a *right* to petition the government for a redress of grievances. I do not see that even the people have the right to WRITE legislation much less those Lobbyists. If I missed the part about Lobbyists – please show me as I don’t want to be wrong on this.

As I have stated in the past – if the legislators are going to allow the Lobbyists to propose, write and present legislation then what are we paying the legislators for? To be errand boys for Lobbyists? We don’t need THEATRE to entertain The People with the parts scripted by Special Interests. Why not call for an end to this charade if Lobbyists are doing what they want and getting it done their way?

Let’s disband the legislature entirely and save all that money – rent out those legislative buildings to a FOR PROFIT party and put an end to the costs associated with the buildings, the maintenance, the staff, and the loss of taxes derived from FOR PROFIT properties.

Legislators and bureaucrats who sell their positions for monetary or political gain are no different than those prostitutes on the corner flagging down passing Johns. Call them what they are, POLITICAL WHORES. As long as the people put up with this the ring of Prostitution just keeps growing.

The following report is in Tennessee but we all know about the Abramoff, Cunningham, and many others across this country who are GUILTY of the same thing – they just haven’t been caught and exposed yet.

That is why my suggestion of campaign contributions would work and eliminate the Lobbyists, the Unions, the PAC’s and all other Special Interests (foreigners). When a person wants to run for any office that person has to go to the people he would represent and no one else. No cocktail campaign parties in WDC or any place other than the affected district and then ONLY from the individuals who can actually cast a LEGAL vote (they have to be alive). If the contributors isn’t legally qualified to cast a vote for the person or the issue then NO FUNDS can be received by the politician or issue group. This eliminates all outside influence and it forces the politician to return to those same people in order to be re-elected. That method truly makes them ACCOUNTABLE to those he is to REPRESENT.

If the politician can’t figure out what his folks want and then write it himself (using staff legal boys to go over for constitutionality) and present it to the other legislators then he isn’t qualified to be receiving a tax funded paycheck or benefits.

Right now we have the worst government money can pay for and each day the news shoves it in our faces. If those sitting in those tax funded chairs had to actually come back home and face us they wouldn’t be doing as they are. Necktie parties aren’t a lot of fun for those who deserve a real fancy knot in theirs.

~ The Author ~
“Granny” (Jackie Juntti) has been a daily reader and frequent contributor to the family of Kettle Moraine Publications almost since our inception two decades ago, in addition to becoming a very close friend and confidant. We will continue to keep her archives alive as long as we are blessed to do so.