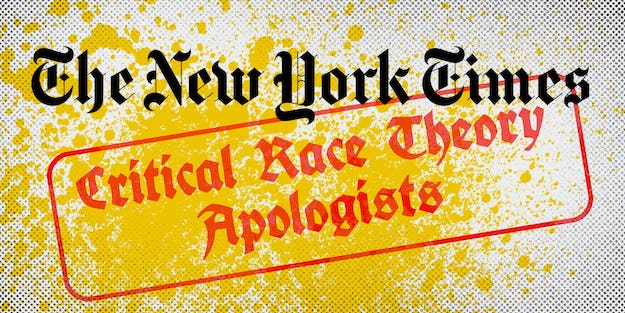 The nation’s two leading Leftmedia papers of record, The Washington Post and The New York Times, have finally, after months of relative silence, decided that the recent beating Critical Race Theory has been receiving from concerned parents and conservative media like ours warranted a defense. In that vein, the Post and Times published articles that are intended to both deceive and downplay the imminent threat posed by CRT.

Offering little other than non sequiturs, the Post ran a piece from African American Policy forum director and UCLA Law and Columbia Law professor Kimberlé Crenshaw titled “The panic over critical race theory is an attempt to whitewash U.S. history.” The title makes clear what Crenshaw proceeds to do, which is disingenuously paint those opposed to the teaching of CRT as being opposed to the teaching of history. She writes:

The speed and virtual unanimity with which June 19 joined July 4 might seem to foretell a new reckoning with America’s brutally racist past, spurred on by 2020’s push to confront injustice. Yet instead of a new era of honesty and critical inquiry, the United States is being dragged into a moral panic about anti-racism itself, as agitated parents, right-wing activists and red-state lawmakers rail against their version of critical race theory. Their assault would allow only for a “history” that holds no contemporary consequences; racism ended in the past, according to the developing backlash, and we would all be better off if we didn’t try to connect it to the present.

As a true believer in CRT, Crenshaw demonstrates that she is fully sold out to its racist and twisted narrative of American history. As John McWhorter has so keenly observed, CRT is not so much an academic theory as it is a secular religion, whose dogma must be unquestionably accept as “truth.”

The Times, on the other hand, didn’t attempt to defend CRT on its merits, or lack thereof. It takes a different tack, with an op-ed written by four authors across the political spectrum, including conservative free speech defender David French. The authors essentially argue not in support of CRT but against the recent efforts of state legislatures to ban the teaching of CRT in K-12 schools.

These laws threaten the basic purpose of a historical education in a liberal democracy. But censorship is the wrong approach even to the concepts that are the intended targets of these laws. … Let’s not mince words about these laws. They are speech codes. They seek to change public education by banning the expression of ideas. Even if this censorship is legal in the narrow context of public primary and secondary education, it is antithetical to educating students in the culture of American free expression.

On its face, it appears to be a compelling argument, especially for conservatives fundamentally concerned with preserving and supporting Americans’ First Amendment free speech rights. However, as Stanley Kurtz keenly counters, the issue directly regards the education of children by the states:

The authors act as though the authority of states over the content of K–12 education is a minor legal technicality. It is not. K–12 teachers do not have the academic freedom that college teachers do, and for a profoundly important reason. Primary and secondary students in public schools are a captive audience. Teachers cannot and must not be allowed to impose their personal politics on children and families legally compelled to use the public-school system (or shoulder significant financial burdens), especially when that involves outrageous and illiberal assaults on our most cherished principles. K–12 students are minors. They are vulnerable to a teacher’s authority in a way that college students are not. Telling minors that they should feel guilt or responsibility because of their skin color is a line that should not be crossed by any school district in these United States. Sadly, while some states will surely allow this to occur, it is well within the authority of other states to prevent this abuse if they see fit, for every good reason.

And this is precisely the problem. The proponents of CRT aren’t interested in education; they’re all about indoctrination. They’re not interested in teaching a balanced and accurate view of history; rather they want to bend the minds of America’s youth against our nation and the values upon which it was established. Their ultimate aim is fomenting revolution.

As the mask of CRT has begun steadily slipping, it has exposed a divisive, vindictive, anti-capitalist, illiberal, Marxist ideology offering only destruction and tyranny. It’s no wonder the Leftmedia has had difficulty attempting to defend such a nasty ideology.

Written by Thomas Gallatin for The Patriot Post – July 8, 2021