Parents clash with the school board over its pushing of leftist indoctrination on their children. 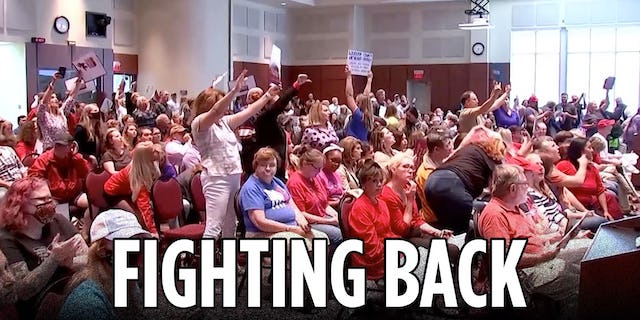 A school board meeting in Virginia was abruptly ended just minutes into a public comment portion on Tuesday after board members faced heat over left-wing school policies like Critical Race Theory indoctrination and the “transgender” thought police. Loudoun County Public School (LCPS) Board Chairwoman Brenda Sheridan had warned the crowd of parents against interruptions and soon called for adjournment following cheering and applause for one speaker. That speaker just happened to be former Virginia state Senator Dick Black, who excoriated the board over the blatant push of leftist indoctrination in schools.

Angered parents cried out in protest of being shut down, demanding that the meeting continue and chanting, “Shame on you!” Many parents refused to leave the assembly, so Superintendent Scott Ziegler called on law enforcement to clear the room, which eventually led to the arrest of two parents.

We have repeatedly noted that as more parents have been alerted to the truth about CRT — and that its inherent Marxist, anti-American ideology is being promulgated in schools across the nation — they have increasingly objected and fought against it. But Loudoun County, Virginia, appears to be where the clash is currently the hottest, and both sides have dug in, as evidenced by the declaration of one parent:

The parent protest won’t stop. I mean, we are an army of moms and parents that will not stop until we’re heard. So they can mute our mics, they can arrest us, they can kick us off of public property. We’re not going to stop. They’re passing laws saying July 1st, after this in the fall, they will fire any teacher that is not culturally in agreement with the school board and their tactics. This is insanity in America. This isn’t freedom of speech. It’s not freedom of religion.
In retrospect, this clash was inevitable and has been coming for some time. Back in 2018, the LCPS board first began pushing the radical CRT agenda when it hired California-based consulting firm The Equity Collaborative at a cost of $422,500 in taxpayer dollars to train teachers in promoting this radical ideology in the classroom. Naturally, it was all under the guise of combatting “inequity,” “racism,” and “social injustice.”

In order to head off objections to this new “woke” curriculum from teachers, the school board created speech codes for faculty and attempted to have them included within their “professional conduct” policy proposal. That attempt largely failed following objections from the teachers union concerned with its impact on educators’ free speech rights.

However, that didn’t stop the board from encouraging teachers to use the curriculum freely in their individual classrooms. Furthermore, the district hired an equity director, Lottie Spurlock, who pushed woke concepts like “white privilege” and distributed an “oppression” graphic listing among the “privileged” group “men, white people, and Christians” and for the “oppressed” group “women, people of color, and non-Christians.”

The LCPS board also targeted teachers who criticized their equity training via an advisory board that demanded such teachers be dismissed. Recall that earlier this month in Loudoun County, Leesburg Elementary School gym teacher Byron Cross was placed on administrative leave after he dared to challenge the board’s proposed “transgender” language policy.

The Leftmedia simply regurgitate the talking points from the Left, insisting the claim that CRT is being taught in schools is overblown and misleading, while asserting that parents and those objecting to CRT really don’t know what they’re talking about. Leftists contend that conservatives are peddling fake conspiracies that have unfairly turned CRT into a bogeyman. Nothing could be further from the truth.

There’s a simple reason for this deflection — more and more Americans are waking up to both CRT and “transgender” ideology, and realizing why they’re so dangerous. Recent polling shows that a majority of Republicans have an unfavorable view of CRT, with 54% saying it has a decidedly negative impact on society. Only 13% of Democrats and 35% of independents share the same opinion. But expect the number of Americans objecting to only grow as more are enlightened to the insidious nature of this divisive and destructive left-wing ideology.