Published on the first generation Federal Observer, January 14, 2002, in the category, ‘Guest Commentary’,

Let it be stipulated that what passes for “conservatism” today has very little to do with the genius vision of the Founders of this nation – those brave patriots who sacrificed life and property toward the establishment of a Republic based upon the doctrine of limited governmental interference into the lives of its citizenry.

As a chronic peruser of and contributor to various “conservative” news forae, I am struck daily with the acquiescence of modern Republicans, especially, in the face of a dismembering of the Bill of Rights – the first ten amendments which are so central to the American Success Story. From the FBI’s Carnivore and Magic Lantern cyber-snooping technology, to the traffic light cameras implanted to record the faces of every automobile driver and passenger, to Echelon, a multinational privacy infringement project, the 4th amendment guarantee against “unreasonable searches and seizures” is effectively dead, and with nary a whimper from the “conservative” voting populace. As well, our President and Attorney General are preparing to charge “American Taliban” adherent John Walker Lindh with “sedition,” instead of the appropriate crime of “treason,” and the decision to do so will not be a simple faux pas: Sedition connotes “unlawful speech” against the Government, whereas “Treason” is warranted by ones actions – the aiding and abetting of an enemy of the State.

There is no doubt, following open confessions on news media channels, that Mr. Walker deliberately and cognizantly entered into acts which constitute “treason”; but a “sedition” charge will serve the Government more effectively. Plainly stated: by prohibiting certain “speech,” a chilling effect bodes heavily on the 1st amendment, imperiling any who might dare to speak out against those in power. Our current Government has, via Carnivore, Magic Lantern and Echelon (and in making mandatory global positional system [GPS] technology in every newly-made cellular phone), implanted mechanisms by which to capture said “prohibited speech,” and to monitor, isolate and capture so-called “dissenters.”

My criticism of conservatives is launched herein for good reason – chiefly, there are but a handful remaining of honorable or semi-honorable Old Left or Left-libertarian activists and pundits (if there were ever more than but a handful): Nat Hentoff, Christopher Hitchens and Camille Paglia springing immediately to mind. But the Right, as students of the Constitution, should know better.

The Founders of this nation recognized the inherent evil that is, by nature, every government; anyone who has read the collected Federalist Papers knows this (and those who have not read it, Congresspersons especially, should; in fact, the reading of the Federalist Papers and the complete diaries and political writings of our Founders should be a stringent requirement for public office). Our nation was built on the notion than humans band together to create Government, and only to protect the rights of those whose rights are infringed upon by others; unlike the former USSR, Red China or the Articles of the United Nations, our Government grants no rights – it merely safeguards the inalienable rights granted us by our Creator. 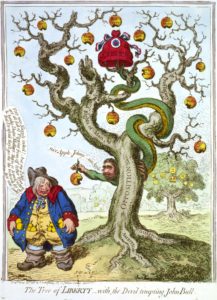 George Washington, a fairly strong supporter of central government, wrote that, “Government is not reason; it is not eloquence; it is force. Like fire, it is a dangerous servant and a fearful master.” Jefferson went much further, exorting ominously, “the tree of Liberty must, from time to time, be watered by the blood of patriots and tyrants.” Patrick Henry, a philospher/activist dearest to mine own heart, conceded nothing as he laid down the gauntlet to King George III and future tyrants, crying, “…give me liberty or give me death.” Compared to these fearless men, today’s conservatives – the vast bulk of them – are neuters, eunuchs, piddling running-dogs at the scraps-table of American history.

You may expect that I will follow next with an “anti-War” polemic, as is currently fashionable amongst the Right/libertarian axis, but you would be wrong. The al-Qaeda should be exterminated, followed swiftly by those who lend to them aid and comfort – wherever it may lead. I have no quarrel with the President on this count, and there are more pressing concerns, anyway; to wit:

Consider, for instance, the last time you witnessed vigorous opposition to the following by the Republican National Committee or on the pages of Front Page Magazine, Enter Stage Right, NewsMax, National Review or at Lucianne.com and FreeRepublic.com:

1) The United Nations: Founded and organized domestically at the Bretton Woods and Dumbarton Oakes conferences by known Soviet agents Alger Hiss, Harry Dexter White, Harry Hopkins and Lauchlin Currie – all known to the State Department as communists, but who, nonetheless, continued to operate on U.S. “taxpayers” dime at the highest of political levels and with the most sensitive of security clearances (similar to the manner in which Rep. Gary Condit continues to hold his seats on four [4] Intelligence oversight committees today).

2) Social Security Administration: An egregious Marxist redistribution scheme, originally enacted as a 1% “temporary and voluntary contribution,” and whose total rate of thievery (employers” “contributions” included) now results in a whopping 15% tax burden on every working soul in America. Robbery, by any other name.

3) The 16th amendment (or, “progressive” income tax): Simply, the harder one works and the more one earns, the more heavily one is penalized by Government. A “progressive” tax on income is, unsurprisingly, the 2nd plank of Marx/Engels” Communist Manifesto. 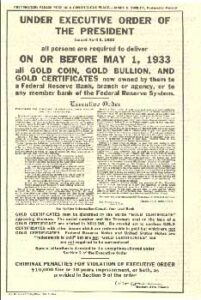 4) The Federal Reserve System: A wholly private banking cartel, supervised very nominally by Government and unaccountable to the voting citizenry. A Central Bank, opposed by every U.S. President – and vehemently by Democrat Andrew Jackson and Republican Abraham Lincoln – was finally forced down the throats of Congress by socialist Woodrow Wilson and his “shadow President,” Edward Mandell House, founder of the Council on Foreign Relations (CFR). Since the formation of “the Fed” (an intentional misnomer, in that it is no more Federal than it is Constitutional), money is backed neither by silver nor gold (a Roosevelt abomination, then Nixon saw to that in ’71), but on the “full faith and credit” of our own gullibility. Were the average American to operate his household”s budget in the manner that does “the Fed,” he would be in prison. (And if you don’t trust me, just try printing your own bills at home.) When the Government performs self-same, it is called, “deficit-spending,” “Keynesian economics” or “monetarism.”

5) The 10th amendment: “The powers not delegated to the United States by the Constitution, nor prohibited by it to the States, are reserved to the States respectively, or to the people.” Simply put: If it ain”t expressly in the Constitution, it ain’t Federal. This stands as the single-most bastardized amendment in the Bill of Rights. Most Government agencies (those claiming Federal status in Washington D.C.) are most assuredly not.

These – and our ruinous open-borders policy, which led directly to the September 11th massacre – are the central issues so critical to the continued existence of the United States of America, as a sovereign Constitutional Republic, and which fail to register more than a blip on the “conservative” agendae. We The People are being bled dry by unresponsive “Representatives,” who appear more and more like a permanent ruling class, and are being set up for Global Governance under the rubric of the U.N., whose bills We The People pay at the rate of 23% of that body’s total budget, while its administration – unelected by and unresponsive to the American people and openly hostile to its Constitutional foundation – craft an agenda for an Orwellian super-state.

All of which begs the question: Are we suicidal?; or merely so complacent or cowed and timid that we cannot recognize Jefferson”s other major dictum, which is, “When the people fear the government, there is Tyranny; when the government fears the people, there is Liberty.”

It will be a bloody, awful tragedy, were the 2nd amendment – those fabled “eight million deer rifles” – to stand as our very last recourse.

Written by Todd Brendan Fahey for News With Views 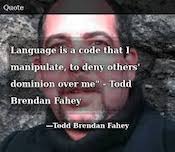 ~ The Author ~
Fahey, a strategic writer stationed in South Korea, has served as aide to Central Intelligence Agency agent Theodore L. “Ted” Humes, Division of Slavic Languages, and to the late-Defense Intelligence Agency (DIA) chief Lt. General Daniel O. Graham; to former Arizona Governor Evan Mecham (R-AZ), former Congressman John Conlan (R-AZ) and others. He is author of Wisdom”s Maw: The Acid Novel (Far Gone Books, 1996) and “Al Hubbard: The Original Captain Trips” (High Times magazine, 1991), exposes of the CIA”s MK-Ultra program and its influence on the Sixties” psychedelic counterculture. He was the architect of DumpMcCain.com

The above bio of the author reflects what is was at the time of the above column. ~ Ed.