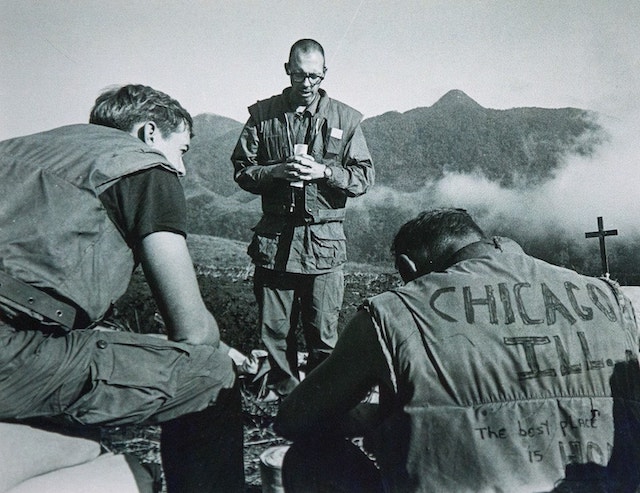 Retired Navy chaplain Ray W. Stubbe leaned over his diary and ran his finger to the entry for Feb. 23, 1968, the 34th day of the Vietnam War’s siege of Khe Sanh and the day the bunker was hit.

The small, sandbag fortress was on the perimeter. He had spent the night there three weeks before, as a half-dozen nervous young Marines sat under a single lightbulb, making coffee in a ration tin and playing a recording of “I Heard It Through the Grapevine” over and over.

Now the bunker had been smashed with some of those Marines inside, and Stubbe, then 29, a bespectacled Lutheran minister, rushed from a nearby medical shelter to help…

What he found would haunt him for years. The Marines inside were in pieces. One was headless. Stubbe carried what was left of another to a military ambulance. “A hand, an arm, a stringy piece of flesh intertwined with cloth and caked with mud,” he recorded.

“I knew them all,” he wrote. They were barely out of their teens. One had been an altar boy. Another had a death wish since he had accidentally killed several buddies in a friendly fire incident during an earlier tour of Vietnam.

Sunday marked the 50th anniversary of the start of the war’s most famous siege, a 77-day struggle for a rain-swept plateau in central Vietnam that riveted the U.S. in 1968, and opened a year of often-bloody social upheaval that resonates today.

The siege was front-page news for almost three months. President Lyndon B. Johnson pored over a scale model of Khe Sanh in the White House. He vowed that the base would never become another Dien Bien Phu, where a besieged French garrison surrendered to the North Vietnamese communists in 1954. 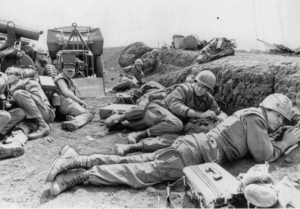 In 1968, Khe Sanh heralded the start of the enemy’s sweeping Tet offensive, in which Vietnamese forces launched a barrage of deadly attacks across South Vietnam, stunning American officials. Tet wound up souring much of the American public on the war and set the stage for the gradual withdrawal of the U.S. troops.

It also opened the bloodiest year of the war, and for many of the 6,000 Marines and others besieged there by 40,000 North Vietnamese, it left physical injuries and disturbing images that would last a lifetime.

Hundreds of Marines were killed and thousands were wounded at Khe Sanh, as the enemy rained as many as 1,300 shells, rockets and mortars on the base a day. The Americans burrowed into the reddish earth, and shared a muddy, subterranean world with the well-fed local rats.

The prospect of death was ever present, and oblivion could come to anyone in a flash. (A Catholic chaplain, Father Robert R. Brett, was killed in a rocket attack the day before the bunker was hit.)

Stubbe developed a fast, 10-minute service focused on the Bible story of Jesus calming the stormy sea. He once conducted 13 services around the sprawling base in one day.

In his diary entry, probably penned that night, he listed the dead and their faiths.

He noted that amid the carnage the big recoilless rifle outside the bunker was unscathed, and the missing head was never found.

A ‘foreshortened future’
Ray Stubbe sat down at the kitchen table in his brick home in this Milwaukee suburb one gray day earlier this month and began his story.

He wore blue jeans, a denim shirt and black sneakers. A vase of white flowers sat in the middle of the table. A Tiffany-style lamp hung from the ceiling. 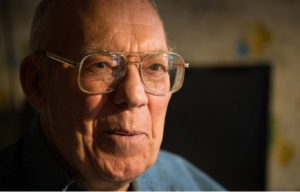 Stubbe reflects on his days during the siege of Khe Sanh, and how it affected his life. (Gary Porter for The Washington Post)

He is 79 and lives alone. He never married, has no close family, doesn’t use the Internet and doesn’t like to travel out of the area — a legacy, he believes, of Khe Sanh. He said psychologists call this a “sense of foreshortened future.”

“Part of it was the siege,” he said. He and others developed the mentality that every day might be their last. “We could never count on another day.”

He was affected by other things at Khe Sanh, and suffered so much from PTSD after the war that he had to be hospitalized twice.

He had nightmares and crying jags, and relived scenes like that in the bunker over and over, as if on a record with a skip in it, he said.

He was troubled by an incident where he was caught in the bottom of a shallow trench during a ferocious barrage. The ground shook, and when he tried to pray, all he could do was babble.

RELATED: Fifty years after Vietnam, veterans gather for what could be a final reunion

And he was distraught when, on Feb. 25, a patrol of 45 Marines was ambushed outside the base and only half of them returned. Again, Stubbe knew many of those who were lost.

He said he often had a dream where he was in a bunker under attack and was the only one left.

For a time, Khe Sanh colored everything in his life, like dye in a clear liquid, he said. “It was all that there was.”

Now it’s “become increasingly set in its place,” he said. “It doesn’t overshadow. It doesn’t preempt. It doesn’t monopolize.”

He gradually realized that his recovery from the trauma of Khe Sanh would be helped if he chronicled the details of the siege. As an historian of the battle, he could step outside his experiences, he said. 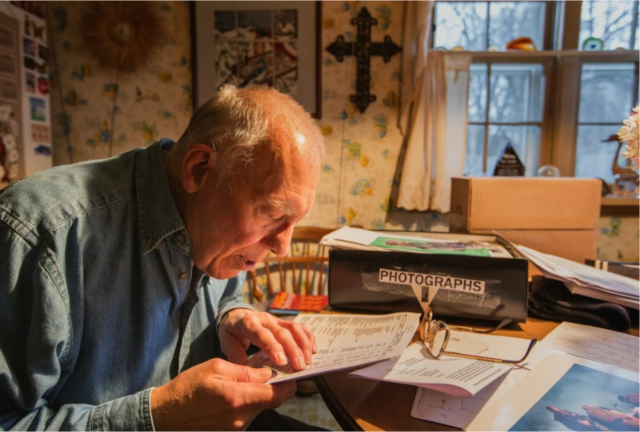 Stubbe looks over a list of names of some of the people he served with in Khe Sanh. (Gary Porter for The Washington Post)

He was already a beloved Khe Sanh figure: “A couple of the Marines swore they once saw him walk across a puddle of water and not get his feet wet,” veteran Steven A. Johnson wrote in a memoir.

“He was the real deal,” said retired Marine officer Kenneth W. Pipes, who was a company commander at Khe Sanh. “He did an awful lot of good for an awful lot of people. . . . Pretty much fearless. . . . [Stubbe] turned up at the key places at the right time for the right reasons.”
AD

In an oral history for the Wisconsin Veterans Museum, Stubbe recalled that he once recited Psalm 91 while holding the hand of a wounded Marine — Thou shalt not be afraid for the terror by night; nor for the arrow that flieth by day. Another time, he wrote, he fed cookies to a Marine with burned hands, as if the snacks were Communion wafers.

After he got home, he immediately transcribed his diary. “I just had to get this out of me,” he said. He retired from the Navy in 1985 and established a ministry in a Milwaukee church visiting shut-ins.

All the while he researched Khe Sanh, exchanged letters with veterans and their families, and gathered memorabilia and artifacts.

He wrote books, essays, and sermons, and his work is often cited by historians. He founded the group, Khe Sanh Veterans Inc., in 1983. 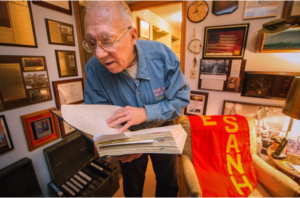 Stubbe reads from a transcript of diary from his days in Khe Sanh. (Gary Porter for The Washington Post)

When Stubbe donated much of his material to the Wisconsin veterans museum in 2005, he said it took two trucks to carry it all away. And still, an upstairs room is filled with mementos, photographs, maps, plaques, news clippings and boxes.
AD

One famous photograph, which appeared in Life magazine, shows Stubbe conducting a service at Khe Sanh. He stands with head bowed, hands clasping a piece of paper, as a group of Marines sit around him in prayer. Rugged mountains and mist where the enemy lurked appear in the background.

Stubbe said he realized later that nobody was wearing a helmet, a potentially catastrophic mistake at Khe Sanh.

An unlikely warrior
Behold, the Lord maketh the earth empty and maketh it waste. And turneth it upside down and scattereth abroad the inhabitants thereof . . .

The opening bombardment of the base began before dawn on a Sunday morning, Stubbe recalled in an autobiographical essay several years ago.

The darkness was illuminated by explosions. A supply depot nearby caught fire. And the air was filled with the odor of burning sandbags, and gasoline that had ignited in a petroleum dump.
AD

As the barrage died down, he emerged to survey the damage, and thought of the prophet, Isaiah: the earth is crumbled in pieces . . . (and) reels . . . like a drunken man.

Stubbe was perhaps the most unlikely participant at Khe Sanh. A Navy lieutenant, he had a degree in philosophy from St. Olaf College and had started a PhD program in ethics and society at the University of Chicago. He had translated scripture into Greek, and carried a Greek New Testament in his uniform pocket.

He said he only carried a rifle once. He was going out with a patrol and the Marines told him that if he didn’t carry a rifle the enemy would think he was an officer and gun for him. 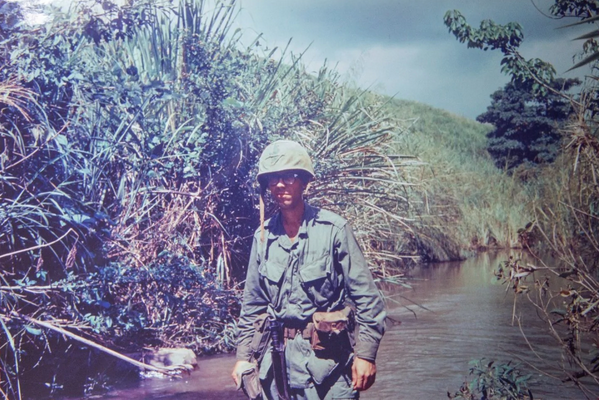 Stubbe had grown up in Milwaukee, the only child of a draftsman and homemaker. He joined the Navy Reserve in high school. In college he decided to attend the seminary. While there, he said in his essay, he joined the Navy’s Reserve Chaplain Company, became an ensign and attended the Navy Chaplains School.

He was ordained in 1965, started a church in a Milwaukee suburb, and began his PhD program in 1966.

But by 1967, the war had heated up, and, feeling a call, he volunteered for active duty. “I was deeply interested . . . in the interface of religion and war,” he said in his oral history. “Can a Christian be a soldier — or a Marine?”

Khe Sanh was relieved by American ground forces that April, and the base was destroyed and abandoned in July, according to historians.

Throughout his ordeal there, Stubbe said, he never had a crisis of faith. 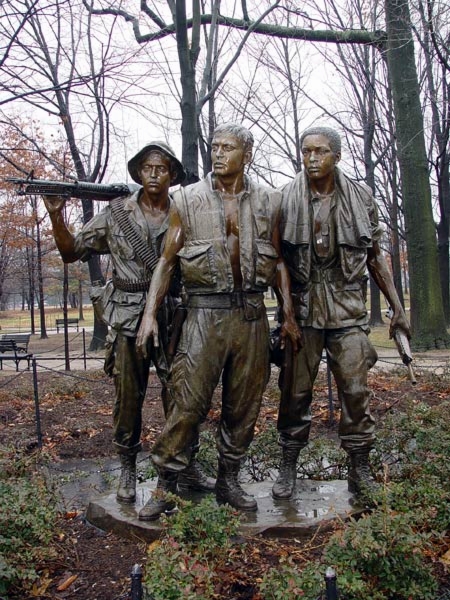 “I always knew that God was with us,” he said, as he sat in his kitchen. “I saw many of the good parts of people. . . . Especially there. It was very apparent to me how good people were to each other.”

Marines shared food, water, letters from home, and gave their lives for each other.

“These are mainly 19-year-olds … happy, friendly, frolicking kind of people playing practical jokes,” he said. “But also just had that genuine sense of caring for each other.”

Those seeking to destroy them were largely distant and unseen, he said.

“I’ve really been enriched,” he said. “I think we’re enriched by the difficulties we pass through, as long as they don’t crumble us.”

Even a half-century later, Khe Sanh still is instructive.

Written by Michael E. Ruane for The Washington Post ~ January 22, 2018