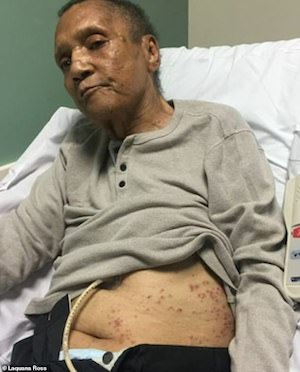 Joel MarrableA Georgia woman says her father was bitten more than 100 times by ants at a government veterans’ home where his room was full of insects after staff allowed him to be attacked by them on more than one occasion.

Laquna Ross found her father Joel Marrable with dozens of swollen, red bumps all over his body when she visited him at the nursing home near Atlanta last week.

The Air Force veteran was dying of cancer during his stay at the DeKalb County campus but she was horrified when she saw his uncomfortable living condition.

‘His room had ants, the ceiling, the walls, the beds,’ Ross told WSB-TV. ‘They were everywhere.’

Ross added that staff had no idea whether her dad was dead or alive when she stopped by and claims they behaved in a nonchalant manner.

‘The staff member says to me, “When we walked in here, we thought Mr. Marrable was dead. We thought he wasn’t even alive, because the ants were all over him”,’ she added.

Ross claims they did not warn her about the ant infestation in his living quarters so she was shocked to see his puffed up hands.

Speaking about the initial incident she told Channel 2 Action News she felt ‘overwhelmed, worried and confused because it wasn’t how he look when I saw him last time’.

Employees bathed her father and cleaned the room, but the ants were still around the next day, Ross said.

Marrable was then moved to a new room, where he died last week, she said.

Now Ross is unsure of what to do. She asked: ‘What is the protocol in the VA to manage something like this?’

In a statement, the Atlanta Veterans Affairs Health Care System said it was told the ants were affecting patients.

All of the bedrooms at the Eagle’s Nest Community Living Center have been cleaned, and a pest control company is monitoring conditions, the VA statement said.

‘We would like to express our heartfelt remorse and apology to the Veterans’ families and have reached out to them to offer appropriate assistance,’ the statement continued.

The campus tweeted Thursday that it was experience technical issues with its phone system.

Ross said: ‘He served his country in the Air Force, and I think that he deserved better.’