Be skeptical of Ken Burns’ documentary: The Vietnam War 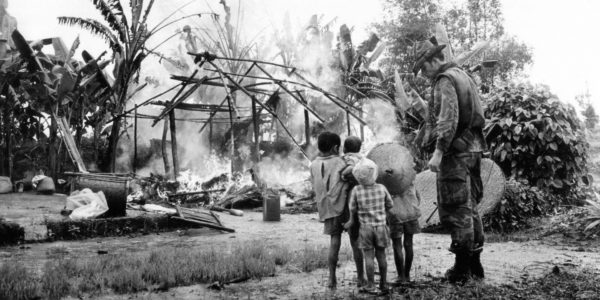 Some months ago I and a dozen other local veterans attended a screening at the Woodruff Arts Center in Atlanta – preview of a new documentary on The Vietnam War by Ken Burns and Lynn Novick” The screening was a one hour summation of this 10-part documentary, 18 hours long.

The series began showing on PBS Sunday Sep 17, and with Burns’ renowned talent mixing photos, video clips and compelling mood music in documentary form, the series promises to be compelling to watch. That doesn’t mean it tells the truth.

For many years I have been presenting to high school classes a 90 minute session titled The Myths and Truths of the Vietnam War. One of my opening comments is, “The truth about Vietnam is bad enough without twisting it all out of shape with myths, half-truths and outright lies from the anti-war left..” The overall message to students is advising them to learn to think for themselves, be informed by reading one newspaper that leans left, one that leans right, and be skeptical of TV news.

Part of my presentation is showing them four iconic photos from Vietnam, aired publicly around the world countless times to portray America’s evil involvement in Vietnam. I tell the students “the rest of the story” excluded by the news media about each photo, then ask, “Wouldn’t you want the whole story before you decide for yourself what to think?”

One of those photos is the summary execution of a Viet Cong soldier in Saigon, capital city of South Vietnam, during the battles of the Tet Offensive in 1968. Our dishonorable enemy negotiated a cease-fire for that holiday then on that holiday attacked in about 100 places all over the country. Here’s what I tell students about the execution in the photo. 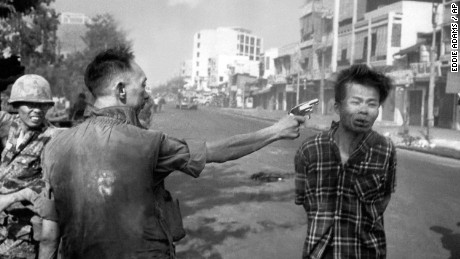 “Before you decide what to think, here’s what the news media never told us. This enemy soldier had just been caught after he murdered a Saigon police officer, the officer’s wife, and the officer’s six children. The man pulling the trigger was Nguyen Ngoc Loan, South Vietnam’s Chief of National Police. His actions were supported by South Vietnamese law, and by the Geneva Convention since he was an un-uniformed illegal combatant. Now, you might still be disgusted by the summary execution, but wouldn’t you want all the facts before you decide what to think?”

Our group of vets left the Ken Burns documentary screening . . . disappointed. As one example, all four of the photos I use were shown, with only the anti-war narrative. Will the whole truth be told in the full 18 hours? I have my doubts but we’ll see.

On the drive home with Mike King, Bob Grove and Terry Ernst, Ernst asked the other three of us who had been in Vietnam, “How does it make you feel seeing those photos and videos?” I answered, “I just wish for once they would get it right.” 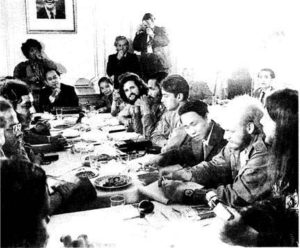 Will the full documentary show John Kerry’s covert meeting in Paris with the leadership of the Viet Cong while he was still an officer in the US Naval Reserve and a leader in the anti-war movement? Will it show how Watergate crippled the Republicans and swept Democrats into Congress in 1974, and their rapid defunding of South Vietnamese promised support after Americans had been gone from Vietnam two years? Will it show Congress violating America’s pledge to defend South Vietnam if the North Vietnamese ever broke their pledge to never attack the south? Will it portray America’s shame in letting our ally fall, the tens of thousands executed for working with Americans, the hundreds of thousands who perished fleeing in overpacked, rickety boats, the million or so sent to brutal re-education camps? Will it show the North Vietnamese victors bringing an influx from the north to take over South Vietnam’s businesses, the best jobs, farms, all the good housing, or committing the culturally ruthless sin of bulldozing grave monuments of the South Vietnamese?

Will Burns show how the North Vietnamese took the city of Hue during the 1968 Tet Offensive, bringing lists of names of political leaders, business owners, doctors, nurses, teachers and other “enemies of the people,” and how they went from street to street, dragging people out of their homes, and that in the aftermath of the Battle of Hue, only when thousands of people were missing and the search began did they find the mass graves where they had been tied together and buried alive?

Will Burns show how America, after finally withdrawing from Vietnam and shamefully standing by while our ally was brutalized, did nothing while next door in Cambodia the Communists murdered two million of their own people as they tried to mimic Mao’s “worker paradise” in China? 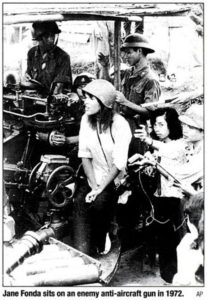 Will Burns show how American troops conducted themselves with honor, skill and courage, never lost a major battle, and helped the South Vietnamese people in many ways like building roads and schools, digging wells, teaching improved farming methods and bringing medical care where it had never been seen before? Will he show that American war crimes, exaggerated by the left, were even more rare in Vietnam than in WWII? Will he show how a naïve young Jane Fonda betrayed her country with multiple radio broadcasts from North Vietnam, pleading with American troops to refuse their orders to fight, and calling American pilots and our President war criminals?

Color me doubtful about these and many other questions.

Being in a war doesn’t make anyone an expert on the geopolitical issues, it’s a bit like seeing history through a straw with your limited view. But my perspective has come from many years of reflection and absorbing a multitude of facts and opinions, because I was interested. My belief is that America’s involvement in Vietnam was a noble cause trying to stop the spread of Communism in Southeast Asia, while it had spread its miserable oppression in Eastern Europe and was gaining traction in Central America, Africa and other places around the world. This noble cause was, indeed, screwed up to a fare-thee-well by the Pentagon and White House, which multiplied American casualties.

The tone of the screening was altogether different, that our part in the war was a sad mistake. It seemed like Burns and Novick took photos, video clips, artifacts and interviews from involved Americans, South Vietnamese, North Vietnamese, Viet Cong, civilians from south and north, reporters and others, threw it all in a blender to puree into a new form of moral equivalence. Good for spreading a thin layer of blame and innocence, not so good for finding the truth.

John M. Del Vecchio, author of The 13th Valley, a book considered by many Vietnam vets to be the literary touchstone of how they served and suffered in the jungles of Vietnam, has this to say about Burns’ documentary. “Pretending to honor those who served while subtly and falsely subverting the reasons and justifications for that service is a con man’s game . . . From a cinematic perspective it will be exceptional. Burns knows how to make great scenes. But through the lens of history it appears to reinforce a highly skewed narrative and to be an attempt to ossify false cultural memory. The lies and fallacies will be by omission, not by overt falsehoods.” 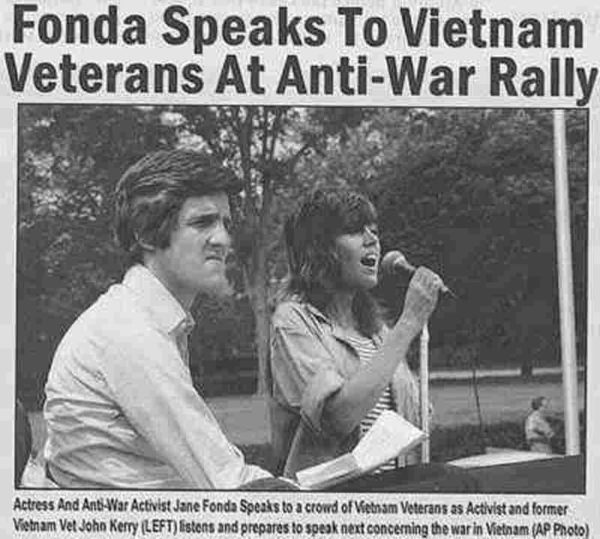 I expect to see American virtue minimized, American missteps emphasized, to fit the left-leaning narrative about the Vietnam War that, to this day, prevents our country from learning the real lessons from that war.

When we came home from Vietnam, we thought the country had lost its mind. Wearing the uniform was for fools too dimwitted to escape service. Burning draft cards, protesting the war in ways that insulted our own troops was cool, as was fleeing to Canada.

America’s current turmoil reminds me of those days, since so many of American traditional values are being turned upside down. Even saying words defending free speech on a university campus feels completely absurd, but here we are.

So Ken Burns’ new documentary on the Vietnam War promises to solidify him as the documentary king, breathes new life into the anti-war message, and fits perfectly into the current practice of revising history to make us feel good.

Perhaps you will prove me wrong. Watch carefully, but I would advise a heavy dose of skepticism.

Written by Terry Garlock for The Citizen ~ September 19, 2017. Terry Garlock lives in Peachtree City, GA. He was a Cobra helicopter gunship pilot in the Vietnam War.