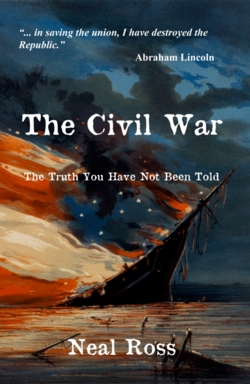 Author Shelby Foote, author of a three part, 3000 page narrative on the Civil War states, “Any understanding of this nation has to be based, and I mean really based, on an understanding of the Civil War. I firmly believe that. It defined us.” I couldn’t agree more. Where we are as a nation today can be directly attributed to what happened during, and after, the War Between the States, as it is sometimes called.

I remember back when I was in school we studied the Civil War during our studies of U.S. history. We may have taken a week to cover it…if that. Over the course of the past decade or so I have learned that much of what I was taught was misleading at best.

Recently my friend Jeffrey Bennett published the second volume of his series AMERICA; the Grand Illusion. It piqued my interest in learning more about the events, and causes of this war, which took the lives of over 600,000 men, more than all our other wars combined. So I began reading as much as I could about this war, which caused families and friends to fight against each other and split a nation in two.

To truly understand the Civil War you must, not only, look at it from the perspectives of the North and the South, or the Union and the Confederacy, and from the perspective of the men who fought it. But it must also be looked at from a historical perspective as well as it changed the way we look at government and its role in our lives.

It has been said that, history is written by the victors. That most certainly appears to be the case when it comes to any discussion regarding the events leading up to, over the course of, and following the Civil War. Abraham Lincoln is regarded as one of our nation’s greatest presidents, he has his own memorial in Washington D.C., his face adorns Mount Rushmore, and we celebrate his birthday as a national holiday. He is also revered by many as the Great Emancipator who freed the slaves. Yet how accurate are the things we have been taught about the war and about Lincoln?

My purpose in writing this is to provide you, the reader, with facts that I was not taught over the course of my education, which have subsequently caused me to change my opinion on the war, and of the President who supposedly saved the Union. The Civil War may have kept the Union intact, but in doing so did it destroy the Republic? These are the things I hope you’ll be asking yourself by the time you have finished reading this essay.

$11.50 via PAY PAL to kettlemoraineltd@cox.net

Send a Check or Money Order – Payable to