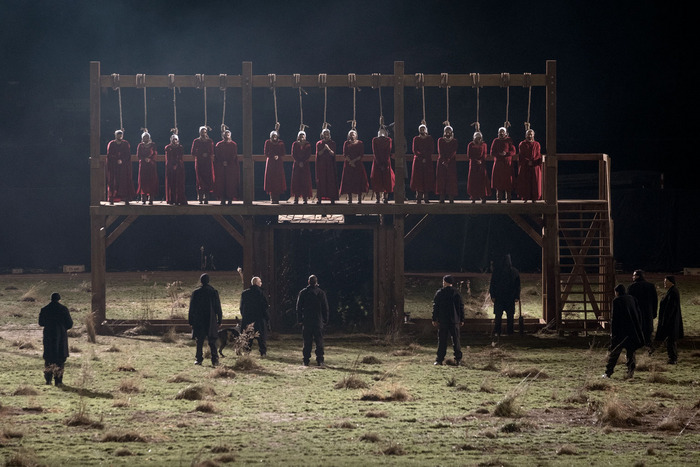 If abortion is really “murder,” why not string up women who “kill their own babies?” Photo: George Kraychyk/Hulu

Generally speaking, I don’t pay much attention to crazy bills sponsored by random wingnut state legislators. But because it secured an extensive hearing in an important state’s legislature, I will make an exception for the Texas bill introduced by Republican State Representative Tony Tinderholt that would make abortion a criminal act of homicide, as explained by Andrea Gonzáles-Ramirez…

The bill alters Texas’ penal code, eliminating the exception for abortions from the definition of criminal homicide. Therefore, everyone involved in providing abortion care — from physicians and nurses to patients seeking this type of care — would face murder charges. HB896 makes no exceptions for rape, incest, or cases where the women’s life is in danger. Tinderholt also proposed the legislation would be enforced “regardless of any contrary federal law, executive order, or court decision,” which would go directly against Roe v. Wade.

This last part is probably the least radical aspect of Tinderholt’s bill (which, in a nod to the meme comparing abortion to slavery, he dubbed the Abolition of Abortion Act) insofar as legislation challenging or defying Roe is being enacted in Republican-controlled legislatures all over the country (including Texas). This bill is best understood as representing the logical end of the strong belief in Right-to-Life circles that a fetus, and even an embryo, are indistinguishable metaphysically, and should be indistinguishable legally, from adult human beings — including very specifically the pregnant women involved. Indeed, as supporters of the bill have pointed out, it reflects the Texas GOP’s party platform, notes the Dallas Morning News:

“[T]he state party platform adopted last year calls on lawmakers to enact legislation “stopping the murder of unborn children and to ignore and refuse to enforce any and all federal statutes, regulations, executive orders, and court rulings that would deprive an unborn child of the right to life.”

There’s talk of sanctioning the Republican committee chairman who held the hearing on Tinderholt’s bill if he keeps it from appearing on the House floor (the same chairman co-sponsored an earlier version of the bill, so his determination on this score could waiver).

The Abolition of Abortion Act has split the anti-abortion lobby in Texas for the very good reason that many of RTL-ers fear it would scandalize voters (and mobilize women) at a time when every effort is being made to claim that it’s pro-choice folk who are the extremists on the subject. You may recall the trouble Donald Trump got into in 2016 when he naively said that women should face some form of punishment for violating abortion bans once they are enacted. That’s a tactical no-no, traditionally.

“Roe v. Wade is unconstitutional,” said Jim Baxa, president of West Texans for Life. “And the 10th Amendment puts it to you all to stand up to that tyranny and do what’s right.”

Baxa said the bill was his organization’s “number one priority” because it was the first to treat abortion fully as a capital felony, giving those who claim to “believe abortion is murder” a chance to “prove that.”

Some might say being compelled to carry an unwanted and/or dangerous pregnancy to term is punishment enough for women who have had the right to an abortion in most circumstances over the last 46 years.

Written by Ed Kilgore and published by the New York Intelligencer ~ April 10, 2019